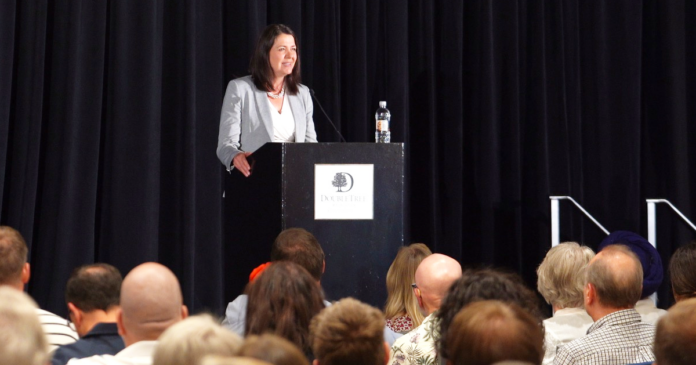 Danielle Smith says the United Conservative Party (UCP) leadership race is shaping up to be a threefold question on who’s the best person to stand up to Ottawa, to beat NDP leader Rachel Notley in the next election and to restore freedom.

“I think that person is me,” she told around 260 supporters in Stony Plain on Tuesday night.

Smith said she’s demonstrated she has a “backbone” of steel as evidenced by her willingness to leave the mainstream media and to take a stand for Albertans’ freedoms.

The former Opposition Wildrose Party leader has been pullings crowds in the hundreds at all her campaign events. She was approved as the party’s second official candidate on Monday night, after handing in 4,500 signatures — more than four times the party’s requirement.

She’s had success in appealing to voters who feel abandoned by the UCP with promises to fix Alberta Health Services, to never lockdown the province again and an insistence to allow for vaccine choice.

Her staunch support of the Alberta Sovereignty Act, legislation which would bar federal bills deemed harmful to the province, has also resonated with voters. The proposal is the product of the Free Alberta Strategy Group, of which co-founder Rob Anderson recently took a leave to serve as Smith’s campaign chair.

Critics of the proposal, including many in the legacy media, have accused Smith of flirting with a constitutional crisis.

But Ottawa already created a constitutional crisis when it blocked Alberta’s constitutionally-protected right to develop its own resources, she said.

“We have a constitutional reckoning coming,” Smith said.

The leadership candidate also said she can address a lack of unity in the UCP because she understands why it exists.

Those reasons include Premier Jason Kenney’s government reversing its positions on a provincial vaccine mandate. The Kenney government has also failed to address equalization payments, which Albertans have said they want to be amended.

“So they didn’t want our dirty oil but you bet they still want us to keep the pipeline of money flowing to the east,” the former Wildrose Party leader said. “We’re not going to put up with that anymore.”

Recently, federal Environment Minister Steven Guilbeault has released a new plan to reduce oil and gas emissions by 40% of 2019 levels by 2030.

“That is a death sentence on our energy industry,” she said. “That’s what happens when you play nice.”

Rival candidate Raj Sherman briefly shared the stage with Smith on Tuesday night. Both agree “the last thing we need is a socialist government with $100 oil,” he said.

Sherman said he doesn’t consider Smith to be competition, saying, “we’re all teammates.”

The former Alberta Liberal Party leader was already disqualified by the party’s Leadership Election Committee, but chose to run anyway. He appealed to supporters to sign his nomination form on Tuesday night, saying he still requires 300 signatures ahead of Wednesday’s application deadline.

All candidates hoping to be approved by the party must submit 1,000 signatures from the province’s five regions and the first $75,000 of the $175,000 contest fee.