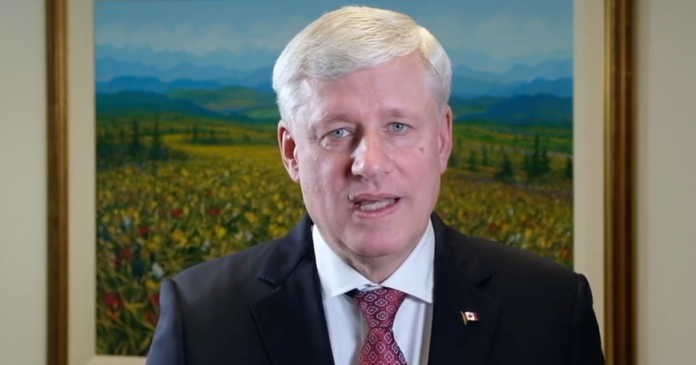 Former Conservative Prime Minister Stephen Harper has endorsed Pierre Poilievre’s bid to become the next leader of the Conservative Party of Canada (CPC).

The endorsement comes as party members across the country receive their mail-in ballots to vote in the contest.

In a video posted Monday evening, Harper said Poilievre has been the “most vocal and effective critic of the Trudeau Liberals” and is “proposing answers rooted in sound conservative ideas, but one’s adapted for today’s realities.”

The former prime minister believes Poilievre has earned strong support among the Conservative caucus and party members and Poilievre is “bringing the most new members and a new generation” into the CPC.

“That’s how we win the next federal election,” Harper said.

In response to the endorsement, Poilievre said he “was proud to serve in [Harper’s] Cabinet, and it’s a big honour to have his support in this leadership race.”

In response to Harper’s endorsement, rival candidate Jean Charest said that the former Prime Minister  “was successful in uniting the Conservative Party of Canada.” He added that he commits to doing the same if he is chosen to be the party’s next leader.

“Mr. Harper has made a personal choice. He and his supporters will always be welcome in the CPC.”

“He will not sit idly by if Jean Charest enters the race,” an unnamed source told Quebec newspaper La Presse in February.

“The boss (Harper) is of the opinion that Jean Charest is not a real conservative.”

Harper served as Canada’s prime minister from 2006 to 2015, winning a historical majority in 2011. He is considered to be one of the top conservative figures in Canada.

The winner of the 2022 federal Conservative leadership race will be announced in Ottawa on September 10.