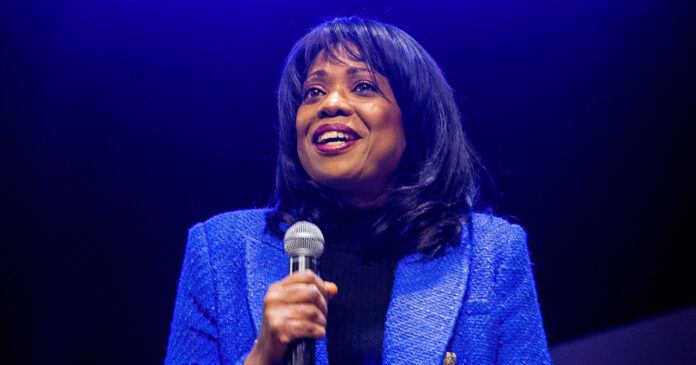 In an email to party members, Lewis pledged to oppose all WEF policies that undermine Canada’s sovereignty.

“I will go further by challenging the WEF net-zero policies that negatively affect our farmers, that dictate climate change policies that impoverish citizens while not reducing emissions, and that will control every aspect of our lives through the digitization of our economy,” wrote Lewis.

“I will stand against WEF policies that undermine our sovereignty, erode our freedom, and attempt to shape our destiny into their post-nationalist state.”

The Haldimand–Norfolk MP also took aim at the Poilievre campaign’s connections to the WEF.

Poilievre’s photo was once featured on the WEF’s website, leading to accusations that the Carleton MP was a supporter of the international organization.

Lewis said she believes Poilievre’s claim that he doesn’t know how his picture got on the website. However, she urged members to reach out to the Poilievre campaign to find out if Baird is still associated with the WEF.

“For the record, I am not aware of any Conservative that is a part of the WEF. Mr. Poilievre has stated that he does not know how his picture got on the website, and I have no information that would cause me to disbelieve him,” Lewis wrote.

“As for Mr. Baird, I’ve met him on a few occasions and he seems to be a decent man. I would suggest reaching out directly to Mr. Poilievre’s campaign to find out if Mr. Baird is still associated with the WEF.”

In May, Poilievre promised that his government would boycott the WEF.

“I have made it clear that my ministers in my government will be banned from participating in the World Economic Forum,” the Carleton MP said at a May 23 campaign event.

“Work for Canada,” he said. “If you want to go to Davos, to that conference, make it a one-way ticket. But you can’t be part of our government and working for a policy agenda that is against the interests of our people.”