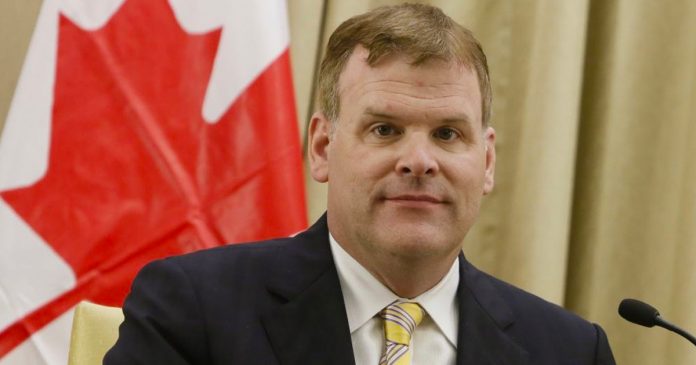 When the people of Iran rise up against their government, western governments should get behind them, former Canadian foreign affairs minister John Baird said.

Speaking exclusively to True North’s Andrew Lawton outside Durres, Albania, Baird said it’s not for Canada or other countries to impose regime change, but they can support the Iranian people when they pursue it themselves.

“Military backed regime change by force doesn’t work. We saw that, regrettably, in Iraq. Having said that, we’ve got to stand with the people in the resistance,” Baird said. “It won’t be western governments that choose the next government of Iran, it will be a democratic choice…. And when the people of Iran begin to do the final push to freedom, those of us outside whether it’s in the west, the Arab world, or Israel, should support their aspirations and do all we can to help.”

Baird said he thinks that moment is coming soon.

“When change happens – when regimes fall – it’ll happen very quickly,” he said. “And there’s no doubt we’re getting closer to that day.”

The interview took place at Ashraf-3, the headquarters of the People’s Mojahedin Organization of Iran (MEK), an Iranian resistance group linked with the National Council of Resistance of Iran.

The MEK was supposed to host its flagship Free Iran Global Summit last weekend, but had to cancel the event due to a terror threat first publicly acknowledged by the United States embassy in Albania. Baird was among hundreds of foreign dignitaries slated to attend, including former Canadian prime minister Stephen Harper and a delegation of Canadian members of parliament.

In the interview with True North, Baird said it’s clear the Iranian regime led by Ebrahim Raisi and Ayatollah Ali Khamenei is in “fear” of the MEK, which boasts a network of thousands of resistance members operating inside and outside of Iran.

The (Islamic Revolutionary Guard Corps) is starting to crack,” Baird said. “The government is afraid. The fact that they were scheduling a terrorist attack on Ashraf 3 this weekend showed how much they fear this, this organization.”

Baird, who served as foreign affairs minister from 2011 to 2015, said Iran is increasingly isolated from the world, including other Muslim nations like the Sunni gulf states of Saudi Arabia, the United Arab Emirates, and Bahrain.

“They live right across the Gulf from the mullahs in Tehran,and so they’re every bit as afraid of this regime as we are,” Baird said, noting Iran’s continued large-scale state sponsorship of terrorism in the Middle East and around the world.

Baird expressed his support for the National Council of Resistance of Iran’s “Ten Point Plan for Future Iran,” a declaration championed by the organization’s president-elect, Maryam Rajavi. The plan calls for a democratic and secular Iran, rejecting clerical rule and embracing freedom of speech, religious freedom, and gender equality.

Baird said Rajavi’s roadmap is good for Iran, and also the world, which helps explain the support across party lines in Canada, the United Kingdom, and United States for the Iranian resistance.

He was clear to point out, however, that it’s the people and not the politicians at the centre of the fight.

“I’m inspired by their courage and bravery,” he said.