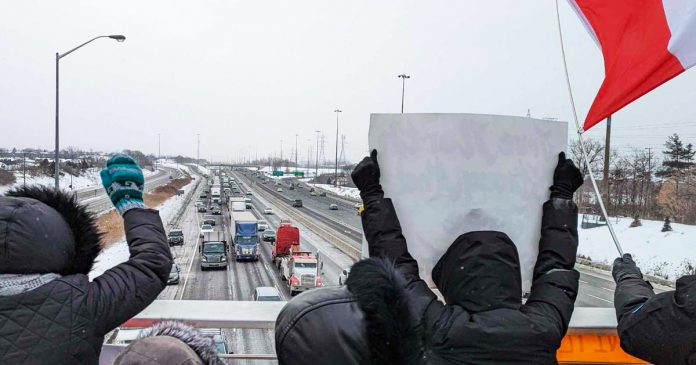 Internal documents procured through an Access to Information request by Blacklock’s Reporter confirm that Farm Credit Canada of Regina (FCC) told employees to record the names of customers who supported the Freedom Convoy. Emails among staff showed names were still being compiled even after the Emergencies Act was lifted.

“If you become aware of a customer’s involvement, report it immediately,” the FCC chief operating officer Sophie Perreault wrote in an email dated February 23. FCC customers suspected of sympathizing with the Freedom Convoy were not to be told they were under watch, wrote Perreault. The Emergencies Act was lifted a few hours later.

“If you become aware of potential customer involvement in blockades, occupations and other support of activity related to the ‘Freedom Convoy’ you must submit a tip to the customer diligence centre,” said the email.

“Include the customer’s name, stated involvement, date and any other pertinent details. Please do not complete any investigative work yourself or communicate any information about FCC’s approach to customers who voluntarily disclose their involvement.”

Perrault warned that customers would face “appropriate action” if they’re deemed supportive of the convoy.

“Any individual and entities that have been verified by the authorities as participating in illegal activity under the Act will face appropriate action which will include not onboarding those found to violate the Act, freezing disbursements and assessing the need to terminate business relationships,” Perraultl wrote.

Records show as late as February 28, five days after the Act was lifted, employees continued to record the names of customers as Freedom Convoy sympathizers.

Blacklock’s Reporter confronted the FCC on February 24, but the agency denied any blacklist.  “FCC has not compiled any list with respect to the Freedom Convoy,” wrote managers at the time.

“FCC employees must not speak to media.”

The FCC claims in another email from an unnamed manager that employees were not instructed to “hunt people down and start scouring the net to see if a customer was involved” in the convoy. However, internal emails revealed that employees were doing just that as late as February 28.

Here is another tip for file,” wrote one employee.

“I have identified two FCC customers that occupied Ottawa,” wrote another. “Both had trucks parked (blockade) and there are several photographs online. If sources are required please let me know.”

Emails also revealed that some FCC employees questioned their employer’s directive to report the names and “other pertinent details” of customers who supported the Freedom Convoy.

“Why are we investigating this?” wrote one manager. “I expected we would get a list from the RCMP.”

On Feb 14, the Trudeau government invoked the Emergencies Act to crack down on weeks-long Freedom Convoy demonstrations against government Covid-19 mandates and restrictions. A special Joint Committee on the Declaration of Emergency was formed on Mar. 3 to investigate Prime Minister Justin Trudeau’s decision to invoke the never-before-used act.

In June, the government decided to release the documents it used to justify invoking the Emergencies Act to the Public Order Emergency Commission on Tuesday after claiming for weeks that they were protected under cabinet confidence.