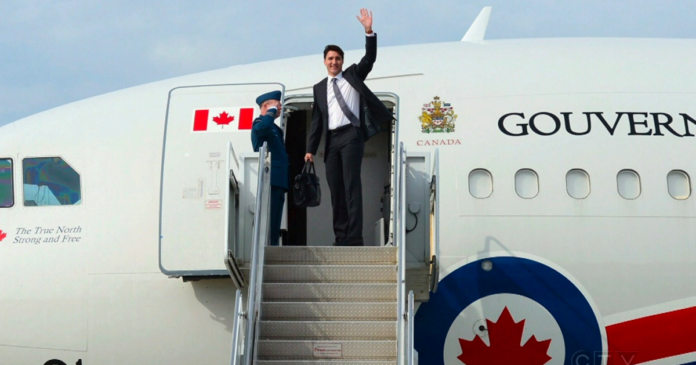 Prime Minister Justin Trudeau spent all but 11 days last month abroad CANFORCE ONE and flew a total of 26,238km across 20 flights within Canada.

According to the National Post’s Bryan Passifiume, Trudeau spent more time in the air this June than all of last summer when he flew 26,059 km, which included a G7 and NATO summit abroad.

Trudeau’s public itinerary from July shows the prime minister was mostly participating in photo opportunities, which included a visit to a children’s camp in Vancouver and a pub in Charlottetown.

For example, on July 9, Trudeau participated in a tree planting event with Environment Minister Steven Guilbeault in Milton, Ont and hours later, embarked on a 2,700 km flight to Calgary for a Liberal party Stampede breakfast.

In July, Trudeau travelled across the country, including trips to Markham, Sudbury, Toronto, Halifax, Charlottetown, Quebec City, Vancouver and Okanagan.

While Trudeau jet-set across the country, his government continued to lecture Canadians to do more about climate change. The government targeted Canadian farmers by proposing to cut emissions from fertilizer 30% by 2030 as part of its plan to achieve net zero in the next three decades. Many farmers believe the government’s latest climate scheme will threaten food supplies.

Passifiume used online calculators to calculate the prime minister’s carbon footprint. According to his estimates, Trudeau released nearly 120 metric tonnes of carbon dioxide into the environment in July.

Passifiume used online flight tracker websites to uncover Trudeau’s flying habits in July. However, the RCAF says it’s looking to restrict public access to the real-time movement of its flights, including ones that carry Trudeau.

After a busy month of photo opportunities and partisan events, Trudeau announced on Sunday that he is hitting the beaches of Costa Rica for a two-week vacation.