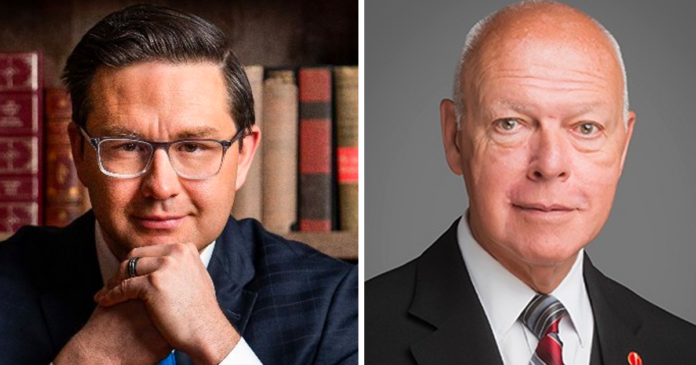 A Quebec Conservative senator is standing by his comparison between Conservative leadership candidate Pierre Poilievre and Russian President Vladimir Putin over Poilievre’s promise to defund the CBC.

As first reported by the Westphalian Times, Senator Jean-Guy Dagenais made the comments while appearing on CHOI 98.1 Radio X Monday.

Dagenais, who is supporting former Quebec Liberal Premier Jean Charest’s leadership bid, also said he would cease being a member of the Conservative party if Poilievre becomes leader.

Speaking in French to True North, Dagenais stood by his comparison and said he would not apologize.

The Quebec senator explained he saw an RDI story about a news outlet in Russia being shut down, something he finds comparable to Poilievre wanting to strip the CBC of government funding.

“What’s with the idea of wanting to cut funding to a crown corporation?”

Dagenais also said Poilievre only wants to only cut the funding to the English part of the state broadcaster, something he finds divisive.

He did however admit that his comparison was provocative.

“It can be startling,” he said. “Maybe I pushed the coffee around a bit for a Monday morning. But the idea is to understand: why cut funding to a Crown corporation?”

Putin, who is seen as a dictator, has been accused of assassinating journalists and political dissidents. His invasion of Ukraine has also killed thousands of people.

Meanwhile, Poilievre is a democratically elected Member of Parliament who has not killed any political dissidents or invaded sovereign nations.

Dagenais had also told Radio X that he objected to Poilievre’s support of the Freedom Convoy, claiming he encouraged truckers to oppose public health restrictions.

When asked by True North if he supported vaccine mandates, Dagenais said that he caught Covid despite being quadruple vaccinated. However, he suggested he may have contracted the virus from Poilievre supporters he met in Alberta.

“I ran into some of Mr. Poilievre’s supporters and they were anti-public health measures, they were against abortion, they told me that they were religious Catholics,” said Dagenais

“You’ll tell me it’s a coincidence – I came back and I had Covid.”

“I think it is a question of responsibility. So I say to myself that someone who is against public health measures, they have the right not to protect themselves and to be sick, but who has the right to contaminate others?”

“I got vaccinated, it’s not just for me, it’s to protect others.”

Dagenais is not the only pro-Charest politician to threaten to leave the Conservative party if members elect Poilievre as leader.

Portneuf—Jacques-Cartier MP Joel Godin has said he would leave the party, and even suggested he may join efforts to form a new party.

While Dagenais is a Conservative party member, he left the Conservative Caucus in 2019, citing then leader Andrew Scheer’s socially conservative views. He now sits with the Canadian Senators Group.

True North reached out to the Poilievre campaign for comment, but they did not respond in time for publication.