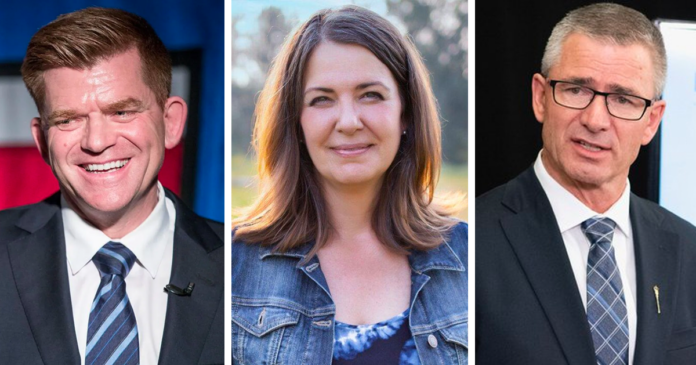 United Conservative Party (UCP) leadership candidates Travis Toews and Brian Jean are questioning Danielle Smith’s ability to unite the party if she doesn’t have a seat in the legislature ahead of the scheduled 2023 provincial election.

The comments come after True North reported earlier this week that Smith won’t seek to represent the riding of Calgary-Elbow should there be a byelection this fall once Doug Schweitzer resigns.

Smith said she will run for the nomination in her home riding of Livingstone-Macleod, but should she win, sitting MLA Roger Reid is entitled to his seat until the scheduled spring 2023 election.

Toews said if elected, he would be focused on uniting conservatives ahead of the provincial election against the NDP.

“I’m not going to want to waste precious time fighting fellow conservatives,” he told True North. “Roger Reid is a valued member of our caucus.”

Jean said Albertans deserve to know who will be facing off with Rachel Notley if Smith wins the Premiership but doesn’t have a seat in the legislature. He wondered if one of the two ministers who recently endorsed Smith — Nate Glubish or Kaycee Madu — would be sparring with the NDP in the chamber.

“We don’t know what promises have been made,” Jean said. “We should know who’s going to be facing off.”

The Smith campaign did not respond to a request for comment.

Former Alberta Premier Jim Prentice did not have a seat in the legislature when he was sworn in as Premier in September 2014, but he won a seat in a byelection the following month.

Don Getty also did not hold a seat in the legislature when he became Premier in November 1985. But he returned to the legislature just over a month later, winning a by-election in his old riding of Edmonton-Whitemud.

Jean said there’s never been a more important time in Alberta’s political history than over the next eight months “and how we set up against Rachel Notley because that’s really what it’s all about.”

UCP leaders will elect a new leader and Premier on October 6.