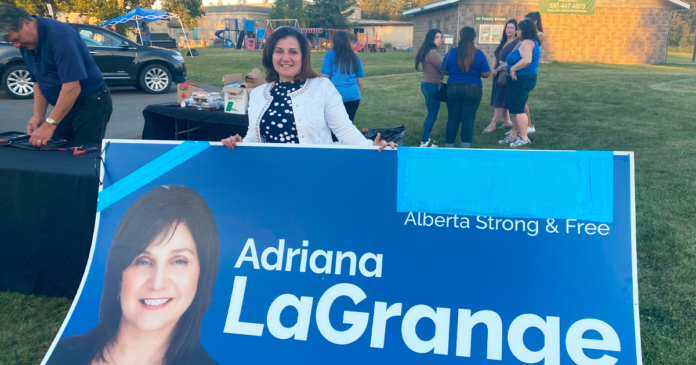 LaGrange told supporters following the nomination that she was “very grateful and thankful for the support,” and that her victory was “democracy in action.”

In an interview with True North just ahead of the polls closing, LaGrange said she’s feeling “cautiously optimistic.”

“I’m very grateful for all the people that came out and supported me and I can look forward to continuing to do the good work that I’m doing as an MLA and as Minister of Education,” she said. “Whatever happens in this vote will happen…this is democracy in action.”

Voting closed at 8 p.m. on Thursday night. The results were announced shortly after.

Clews co-founded Hold The Line, a group which supported Albertans impacted by Covid-19 restrictions and helped them resist vaccine coercion.

He previously told True North he was motivated to run because LaGrange did not support the freedom movement.

“Even to date, I have not heard (LaGrange) voice any type of support for the rights and freedoms that we once had as Albertans,” he said earlier this month.

“I’m not impressed with how our government has handled the pandemic, how they have so casually given rights and taken rights away from Albertans…we need to elect leaders to go to the Alberta legislature and stand for freedom.”

In this role, she implemented a new K-6 curriculum to improve literacy and numeracy. Critics said the curriculum lacked consultation and included portions lifted from Wikipedia. It will begin rolling out in schools this fall.

At the Alberta Teachers’ Association Annual Representative Assembly in May 2021, a motion of non-confidence in LaGrange was passed with 99% of delegates voting in favour.

No sitting UCP MLAs have lost their nominations so far. In July, Innisfail-Sylvan Lake MLA Devin Dreeshen hung onto his UCP nomination by just eight votes.

Eckville-area farmer Tim Hoven said in March he was unjustly disqualified from running because he is alleged to have used a social media platform also used by white supremacists. He sought to run in Finance Minister Jason Nixon’s riding of Rimbey-Rocky Mountain House-Sundre.

UCP leadership candidate Danielle Smith has said she would reopen riding nomination contests if elected premier of Alberta this fall.

“I will pledge to you as well, if any of the local ridings wants some of those ridings reopened because they don’t believe that they’ve been fair or they believe the candidates have been disqualified inappropriately, we will address that when I’m elected,” Smith said at a rally in July.