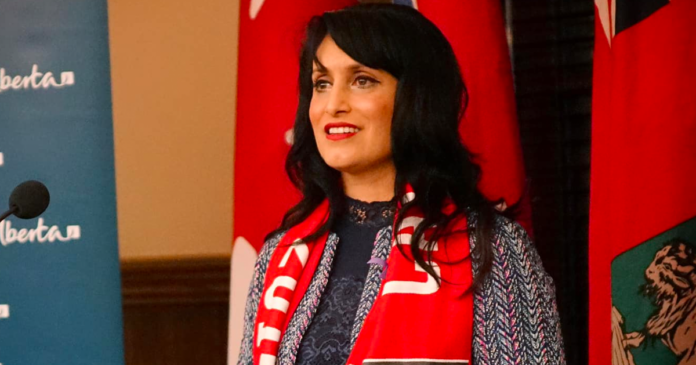 APP and Rebel News are hosting a UCP leadership debate in Edmonton on Thursday which Danielle Smith, Todd Loewen and Brian Jean are attending.  Aheer declined to attend, while candidates Travis Toews and Rebecca Schulz initially agreed to participate but withdrew last week.

“I’m not going to mince words,” Aheer wrote on Twitter.

“White supremacy, homophobia & racism have been supported & encouraged for too long in politics.

Anyone participating in the Prosperity Project / Rebel Media Debate, should be held accountable for supporting this toxic culture.”

APP advocates for Alberta freedom and prosperity through independence.

If elected premier, Aheer said there will be “no room for those who support this agenda.”

“Alberta has a set of core values, and they are in direct opposition to what’s on display here,” she wrote.

“Today I’m putting my foot down, and saying enough, do better.”

In a joint statement to CBC, Toews and Schulz said they are not attending because it’s a fundraising event “in support of a third-party advocacy group that supports an independent Alberta.” They also expressed concern with APP’s plan to create a competing political party with constituency associations.

In a response to Aheer, True North’s Andrew Lawton said the leadership candidate previously declined to go on his show and instead requested a questionnaire.

“Her baseless ‘white supremacy’ charge about a debate the frontrunners are okay attending is just a convenient way of avoiding questions,” Lawton wrote on Twitter.

The Calgary Stampede event was hosted by Liberal MP George Chahal on July 10. Aheer was invited to the event by Chahal, one of her childhood friends

Following a UCP leadership debate last month, Aheer explained that there are many Albertans who vote for the federal Liberals, but for the Conservatives provincially.

“I was so privileged to be invited. Doesn’t matter to me what party you’re part of, but I have sold 25 memberships that day,” Aheer said. “So it was fantastic.”

In a recent Leger poll which surveyed UCP supporters, Aheer registered no support.

UCP members will elect a new leader and premier on October 6.