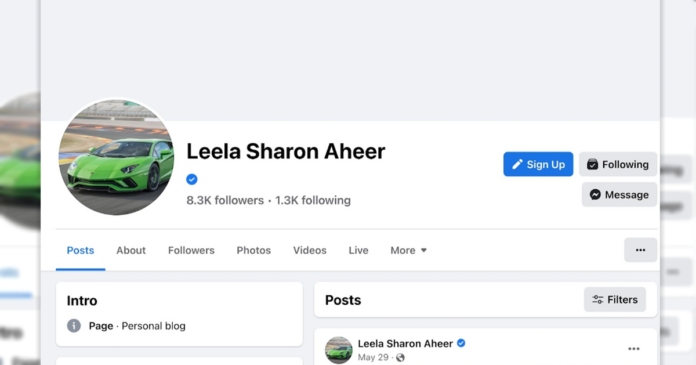 United Conservative Party (UCP) leadership candidate Leela Aheer says her personal and public Facebook accounts have been hacked — and are being used for “sexual exploitation.”

Aheer’s accounts were first hacked on Friday and the profile photo on her public account was updated to a picture of a green Lamborghini.

In the days since, the breach has grown more sinister as hackers have begun using Aheer’s personal account to “purchase nefarious and disgusting content under my name,” the leadership candidate said.

“Welcome to politics! My personal and public Facebook accounts have been hacked,” Aheer wrote on Twitter. “This is a targeted attack and I woke up to messages stating that my account is being used for sexual exploitation. This is disgusting. We will find the perpetrators.”

Facebook notified Aheer on Tuesday that restrictions were placed on her account after multiple posts went against the social media platform’s community standards on “child nudity and sexual exploitation.”

In response to a social media user asking Aheer about her account, she said she’s “dealing with the police right now as the picture that comes is pornographic.”

“My heart is just broken.”

Aheer said hasn’t seen the pornographic images, she only recieives the “gross” notifications in the middle of the night. The hack is an attack on her family, friends and personal integrity, she said.

“This is more than a distraction-this is (an) attack leveraged to hurt our campaign, but we won’t back down,” she wrote.

The Chestermere-Strathmore MLA has also been asking her Twitter followers to report the account as hacked so she can recover it.

The RCMP have confirmed they are investigating the incident.

“This is unacceptable & I hope the perpetrators are brought to justice,” Sawhney wrote on Twitter. “Being a woman in politics is not easy but I know Leela, this will only make her stronger.”

Recent polls have placed Sawhney and Aheer as the last two candidates, behind the other five contenders.

Aheer has come under fire in recent days for saying those participating in the Alberta Prosperity Project — a group which supports Alberta independence — and Rebel News debate and fundraiser are responsible for “white supremacy, homophobia and racism.”