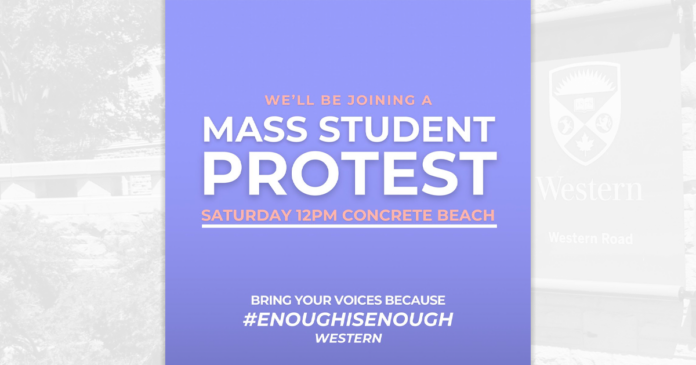 Western University students are pushing back against new Covid mandates by holding an in-person demonstration against booster requirements on Saturday.

As first reported by True North, the University of Western Ontario is reimposing its mask mandate and will require all students and staff as well as visitors to have three doses of the Covid vaccine by October 1.

The university says a grace period will be given for those who are not yet eligible to receive a booster.

The news has frustrated students and some are fighting back, including graduate student Kendra Hancock, who launched the Enough is Enough Western campaign.

The campaign is calling on the university to reverse course and drop both its mask and booster mandate – giving students the option to choose.

“We’re doing something controversial… believing in an adult’s right to choose,” reads a tweet from the campaign.

They will hold an in-person protest at Western University’s concrete beach Saturday at 12pm.

Speaking with True North’s Andrew Lawton, Hancock said that when she saw the announcement, she knew she had to do something.

“I knew this had to be done… I thought about some things that might be helpful for the community to know, or to have one central spot where people could talk and could support one another.”

She believes students are being coerced into taking the vaccines – citing an Instagram poll where she asked students if they had gotten vaccinated last year because of Western’s previous mandate, and if they had felt coerced.

“So far it’s overwhelming for people feeling like they’re absolutely forced into this situation,” she said.

“It’s kind of like if a country said, oh well a hundred percent of our citizens have…  joined the war effort. But then you say, ‘yeah but don’t you have conscription?’”

Western is also facing criticism for announcing its mandate last minute, after the deadline for students to pay their first installment of tuition. Hancock says the timing “has been definitely less than ideal.”

The University has since said that it will allow students to receive a refund as long as they submit a request by September 1.

Enough is Enough Western now has over 4000 followers on both Twitter and Instagram. Hancock also told True North she has received a large number of messages, causing her to seek extra support to help manage the campaign.

“This is one of the first times in a long time, I’ve seen the entire Western student population be united, and that’s a really great thing,” said Hancock.

Hancock is not the only one to have started an initiative to oppose Western’s new Covid policies.

It should be noted that booster uptake among young people in Canada is low, with data showing that only 36.39% of 18-29 year olds and 19.27% for 12-17 year olds have received three or more vaccine doses.

Following Western’s controversial announcements, its affiliated Brescia women’s college has said it will not mandate boosters or masks, but encourages compliance with Western’s policy.

Other Ontario institutions including the University of Waterloo, University of Guelph and Wilfrid Laurier University have said that they will not mandate boosters.

Western University did not return True North’s request for comment in time for publication.