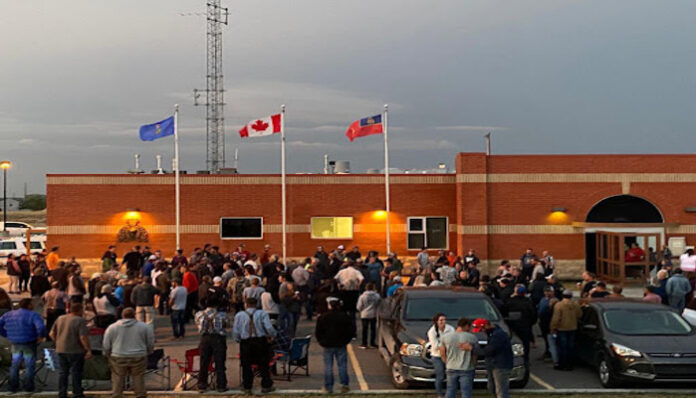 Coutts border protester Alex Van Herk says the Alberta RCMP dropped a condition which would force him to end contact with his best friend and fellow protester after 200 people showed up to an RCMP detachment to protest his detainment.

On Thursday evening, True North reported that around 30-40 protesters gathered outside the RCMP detachment in Fort MacLeod, Alberta to demand Van Herk’s release. As the night went on, that crowd swelled to 200 people who protested until Van Herk was released.

“If we stand up against tyranny, we have the ability,” Van Herk told True North on Friday morning. “The power is in the people, but the people have to be there to do it.”

As True North previously reported, the RCMP told Van Herk he was being detained for obstruction of a peace officer during demonstrations at GraceLife church. The RCMP told Van Herk’s family he would be released within a matter of hours, but complications began after Van Herk turned himself in.

Van Herk said the RCMP added an additional charge of mischief over $5,000 stemming from the Coutts border blockade. He said he knew the charge was coming and was still willing to sign the documents — until he saw a condition demanding he cease all contact with Marco Van Huigenbos, his best friend of 13 years who was also at Coutts.

“I refused to sign the condition,” Van Herk said.

Supporters were aware Van Herk was supposed to be released by dinner and began to arrive as his detainment continued into the night.

Inside the detachment, Van Herk told the RCMP the crowd will grow “and double every hour.”

“‘If you guys don’t want things to escalate, I suggest you remove that condition,’” Van Herk said he told the RCMP.

The RCMP eventually removed the condition and Van Herk was released around 9 p.m., he said.

At this point,  200 people had arrived to “just surround (the detachment) with support for Alex,” one source told True North. The demonstration included a dozen pieces of farm equipment like combines, tractors, and balers. The police detachment was not barricaded and officers were able to come and go, the source said.

An RCMP media relations officer confirmed that an arrest was made in relation to the Coutts border protest on Thursday and that a peaceful protest ensued outside the Fort Macleod detachment. The RCMP can’t release any names or details until court documents have been sworn, the officer told True North on Friday.

After GraceLife Pastor James Coates was arrested for continuing to preach in breach of Covid-19 restrictions, Van Herk travelled to the church outside Edmonton. A photo of him grabbing a police barricade — which was erected to keep churchgoers from entering their building — went viral. In the photo, Van Herk is seen grabbing one end of the barricade while police are grabbing the other.

Van Herk’s next court date is on October 4 in Lethbridge regarding mischief from Coutts border. He will also appear in court on October 19 in Stony Plain regarding his charges from the GraceLife protest.

Van Herk said not everyone has the support and community he has, but encouraged those people to get involved with freedom groups cropping up across Canada.

“That is my recommendation,” he said. “Let’s try to unify all these groups and work together as a big voice.”

Majority of Canadians believe prisoners should still be segregated based on biological sex, says poll

Half of Canadians say Freedom Convoy was threat to national security:...