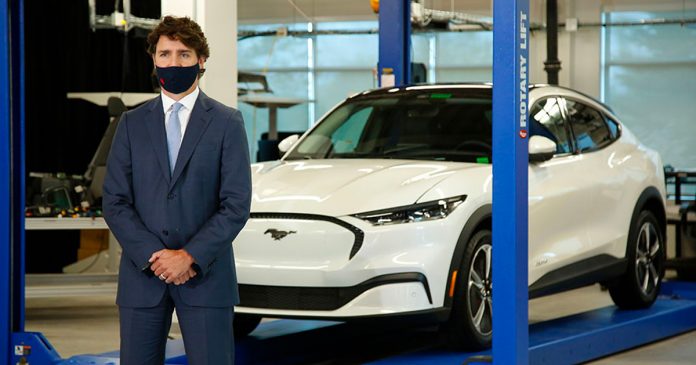 Prime Minister Justin Trudeau has made it a priority for his government to promote electric vehicles (EVs) and have the Canadian population convert to “zero-emission vehicles” in the near future to reduce emissions and shrink Canada’s carbon footprint.

True North has compiled a list of major issues with the Trudeau government’s narrative that transitioning to EVs is the way to create a more green world.

Unlike combustion engines that use lead-based batteries, EVs draw their energy from lithium-ion batteries – similar to the batteries used in smartphones.

Three metals – nickel, cobalt, and lithium are required components to make an EV battery, and the extraction of these metals leaves significant environmental and humanitarian harm in its wake.

In 2020, the CBC reported that nickel production results in “air pollution, water contamination and the destruction of habitats.”

Nickel mines in Indonesia’s Obi islands are polluting the nearby Kawasi sea by dumping millions of tonnes of waste into the ocean, making the waters nearly uninhabitable for fish and disrupting the livelihoods of local fishermen.

In the Democratic Republic of Congo, cobalt mine workers are subject to harsh working conditions while earning very little money for their efforts. The mines are rife with child labourers, and dangerous conditions routinely take workers’ lives – sometimes dozens of lives at a time due to mining accidents.

Among other tech companies, Tesla was named in a lawsuit accusing them of aiding and abetting the death and serious injury of child labourers working in Congolese cobalt mines.

Chilean lithium mining is also a problem. There they use a technique that requires massive amounts of water to extract the metal, resulting in Chile’s already dry regions drying out further and damaging the surrounding natural ecosystem.

In Tibet, lithium mining has caused hydrochloric acid and other toxic chemicals to leak into the local water supply from the mine’s evaporation pool.

While the Trudeau government strongly encourages Canadian families to switch to EVs, it isn’t apparent that this is the most cost-effective and convenient decision for most people.

Experts predict that a rapid increase in EV ownership may inadvertently lead to blackouts if millions of EVs charge simultaneously.

In California, a heat wave has state energy officials urging citizens to stop charging their electric vehicles, as the power grid faces strain and could possibly lead to a brownout or blackout.

Since Canada gets very cold for multiple months of the year, Canadians have to worry about EVs battery performance potentially cratering in the chillier conditions.

General Motors is being sued for their 2017 Green Car of the Year Chevrolet Bolt battery performance substantially dropping in colder weather – failing to reach the advertised range of 383 kilometres per charge.