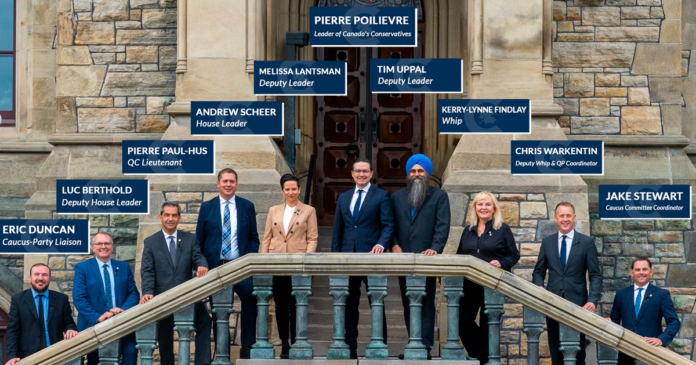 Poilievre says his team’s first job will be to “stop Trudeau’s tax hikes and end #JustinFlation so workers and seniors can thrive.”

Shortly after Poilievre unveiled his leadership team, Prime Minister Justin Trudeau announced additional government spending in an effort to help Canadians struggling with inflation, as part of the government’s coalition with the New Democrats.

“Today, we’re announcing additional targeted new measures that will support the middle class and people working hard to join it. These will be the very first pieces of legislation that we introduce when the House returns,” said Trudeau.

The government will roll out the first stage of a universal dental care program, boost the GST tax credit and provide a one-time increase to the Canada Housing Benefit.

In response, Poilievre claimed Trudeau was “pouring more gasoline on the inflationary fire.”

A full list of Poilievre’s leadership team is as follows:

Earlier on Tuesday, Richmond–Arthabaska MP Alain Rayes quit the Conservative caucus, claiming that the party’s direction was no longer compatible with his views and that he would sit as an independent MP.

“I have just informed the Speaker of the House of Commons that I am leaving the Conservative caucus in order to sit as an independent MP. I remain a proud Progressive Conservative and I will continue to serve my constituents of the riding of Richmond-Arthabaska with determination,” said Rayes.

“I respect the choice made by members of the Conservative Party of Canada in the last leadership race. However, some of my political ideals, values and convictions are not compatible with the new path undertaken by our political formation.”