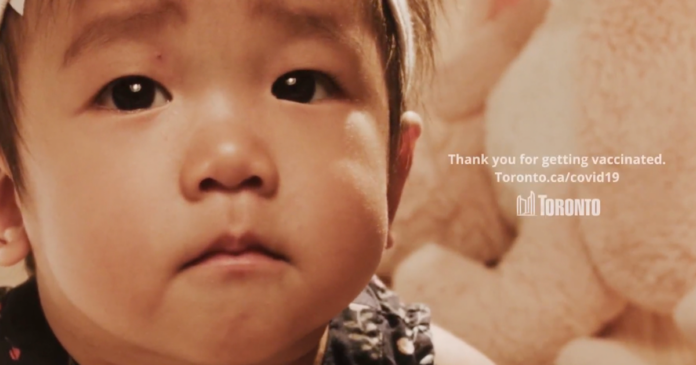 The City of Toronto is reviewing a series of five videos promoting child Covid vaccines to “determine what changes may need to be made to ensure clarity of the message.”

The five short videos were published on Friday but went generally unnoticed until Tuesday, when social media backlash prompted the City of Toronto to pull them from its social media accounts.

In one of the videos, an infant is on a video call with cooing relatives.

In another, a young girl is told by her mother she can’t go outside to play with her friends because “there’s still something going around.”

All of the videos conclude by telling viewers that Covid vaccines are available to children as young as six months old.

This video isn’t a one-off. It’s part of a multi-part campaign. In this video, the City of Toronto suggests you should keep family members from your infant unless the infant is vaccinated. pic.twitter.com/jTvCXIWqws

City of Toronto spokesperson Brad Ross told True North that the ads were “designed to engage parents and caregivers about the availability and efficacy of vaccines for children.”

“(They) have all been paused while being reviewed to ensure the messages are clear and unambiguous,” Ross said.

The City has said that no elected officials were involved in the development or production of the campaign, which it describes as part of a “community-led initiative overseen by the City.” The campaign was produced by Toronto’s vaccine engagement team alongside a municipal initiative to mentor “BIPOC and 2SLGBT youth…to be filmmakers.”

“The ‘vaccine engagement team’ is a group of community ambassadors who have done an excellent job reaching out to communities that are hard to reach, be it language or culture barriers, or where low vaccination rates are seen,” Ross said.

In this edition of the City of Toronto’s child vaccination campaign, you have to vaccinate your child so they can leave your house for school while you work from home. pic.twitter.com/50xU6tXxmR

The videos were produced under the auspices of Toronto’s ArtWorks TO program.

“ArtWorks TO provides opportunities for youth media artists (18-29) who are Indigenous, Black and People of Colour and/or 2SLGBTQ+ to gain professional experience, skills and network in the media arts industry,” the program’s website says.