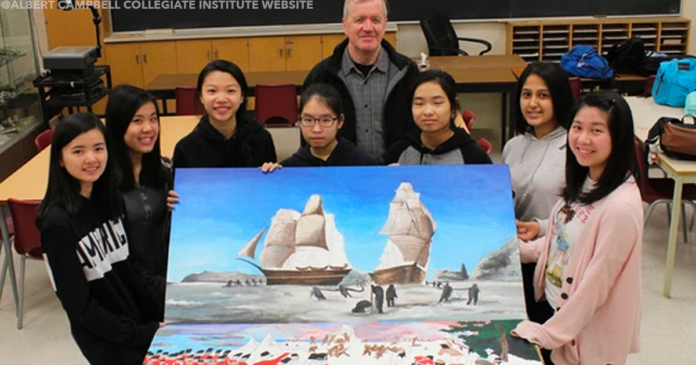 A retired teacher is speaking out after the Toronto District School Board (TDSB) removed a student-painted mural depicting Canadian historical moments over fears that it might be racist.

Veteran and former Albert Campbell Collegiate Institute teacher Graham Bye first heard about the murals being removed from the community.

“I instantly knew this would have something to do with social justice and equity and things like that,” Bye told the National Post.

“Where are these school officials getting off and deciding what everybody else is able to see?”

Bye said that the mural removal was a “tiny example” of a greater problem with far-left politics infecting everything.

“This mural thing is just a tiny example of the same kind of madness about pulling down statues and things like that,” said Bye.

“We took very stringent measures to ensure that the content on the murals wasn’t offensive or anything like that.”

The 15 murals depicted events in Canadian history, including the War of 1812, the Franklin Expedition and the Battle of Queenston Heights.

“They were taken down over the summer. My understanding is that staff wanted to have further discussions about them and took them down until those discussion could be had,” said TDSB spokesperson Ryan Bird.

According to Bird, “the depiction of Indigenous people in the paintings of historical scenes” was what caused the removal.

“They think they’re protecting people. Do you realize you’re behaving exactly like the communists or the Nazis you think you’re protecting us from?” said Bye.

“I think that’s what you were supposed to do as teacher, but apparently it’s triggering now. You know, it’s just ridiculous.”

The TDSB has been plagued by a number of scandals due to the influence of woke politics. As reported by True North last year, the board moved to rename Queen Victoria Public School citing the former monarch’s “racist legacy.”