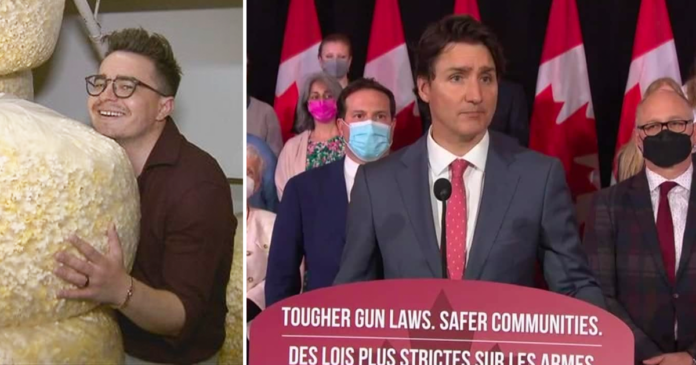 The Canadian Coalition for Firearm Rights (CCFR) is clapping back at a CBC reporter for trying to “instill fear” about law-abiding gun owners with a tweet criticizing the Alberta government’s opposition to Justin Trudeau’s gun bans.

CBC Calgary reporter and editor Tom Ross tweeted photos of four guns “included in the federal buyback program which Alberta will challenge, calling it a waste of money.”

“Unless you are actively fighting on the front line of a battlefield, I do not understand why anyone needs to have these in their home,” Ross tweeted.

Like most of the 1,500 firearm variants the Liberals banned by order-in-council in 2020, all four guns are semi-automatic, meaning one trigger pull fires one bullet. Fully-automatic firearms have been illegal since 1977.

In Canada, these guns also require that magazines be pinned to limit them to five rounds, far less than what a soldier on a “battlefield” would have in a military-grade firearm.

“At worst, @Tommy_Slick’s deliberately attempting to instill fear in uninformed Canadian’s by creating a false narrative that he knows is statistically incorrect,” the Canadian Coalition for Firearm Rights wrote on Twitter.

“Tom’s JOB is to ‘report’ VERIFIABLE news to the Canadian public, not his personal bias to ‘CREATE’ news of his choosing.”

Ross’ tweets referenced an announcement from the Alberta government on Monday that it told the Alberta RCMP to ignore orders from the federal government to participate in Ottawa’s gun grab scheme.

In May 2020, Prime Minister Justin Trudeau announced he was banning more than 1,500 models of firearms, including AR-15s. Owners of these guns would have a two-year amnesty period to come into compliance with the prohibition, he said at the time.

The Liberals said they planned on spending up to $250 million buying back the guns.

The government failed to launch its buyback plan before the amnesty period expired, so they extended it earlier this year until October 2023.

Alberta Justice Minister Tyler Shandro said federal Public Safety Minister Marco Mendicino asked the province to help confiscate 30,000 newly-restricted firearms beginning this fall. The province refused to help and further sent orders to the RCMP that the confiscation efforts were not a provincial priority and therefore an inappropriate use of police resources.

Tracey Wilson of the CCFR said the Liberal government is again trying to politicize the RCMP, as it did after the Nova Scotia mass shooting.

“Provinces continue to bear the work and cost of federal political decisions, including increased burden of CFO offices to now this, with no additional funding. It’s a war on legal gun owners and Premier’s aren’t playing. The CCFR stands ready and willing to work with the provinces to refocus this government on credible public safety measures.”