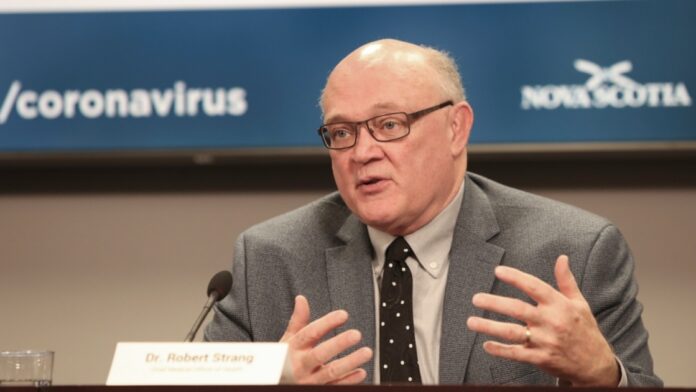 Nova Scotia’s Chief Medical Officer of Health Dr. Robert Strang turned down an invitation to an upcoming medical conference on free speech claiming that nobody at the public health unit was available to present.

“We would like to invite you personally, or someone you feel could represent public health in your stead, to speak on the issue of how the difficult balance between allaying public fear and maintaining science-based policy was maintained during COVID,” wrote Milburn.

“Thank you for this invitation but none of the (Medical Officer of Health) team is able to present at this conference,” Strang replied.

Milburn – who was the former department head of emergency medicine for Nova Scotia’s eastern zone – was fired from his three-year position after he gave an interview last year in which he critcized the “de-facto rule” of public health decision-makers.

Since undergoing the ordeal Milburn has continued his practice as a doctor and hopes that the conference will bring together professionals to underscore the importance freedom of expression plays in science.

The event will take place from Oct. 28-30 and features notable guests such as Dr. Matt Strauss, Dr. Jay Bhattacharya, lawyer Bruce Pardy, journalist Trish Wood and others. According to an agenda posted online, topics to be covered include the polarization of medicine, Covid and kids and the science behind masks.

Milburn told True North that he doubts Strang’s assertion that there was nobody available to present.

“They are a huge organization with tons of staff,” said Milburn. “I think what he’s saying, without wanting to say it directly, is: ‘We don’t want to speak at your conference because we don’t owe you any explanations. We do what we want and don’t have to explain it to you, or anyone’.”

True North reached out to Strang for comment and to ask why he rejected the invitation but did not receive a response by the time the article was published.

Milburn has presented the event as a fully-fledged academic conference and an opportunity for Canadians to hear directly from those who have been branded as “medical heretics” for voicing opinions contrary to the dominant pandemic narrative.

“I don’t think the general public knew how politically correct and shut down conversations in medicine were even prior to all this crazy stuff happening in the field with critical race theory and all that,” said Milburn. “It was already happening.”

“I think it’s an amazing conference that has pretty privileged information… So it’s going to be typically useful for people to come in here and hear the evidence (for themselves).”