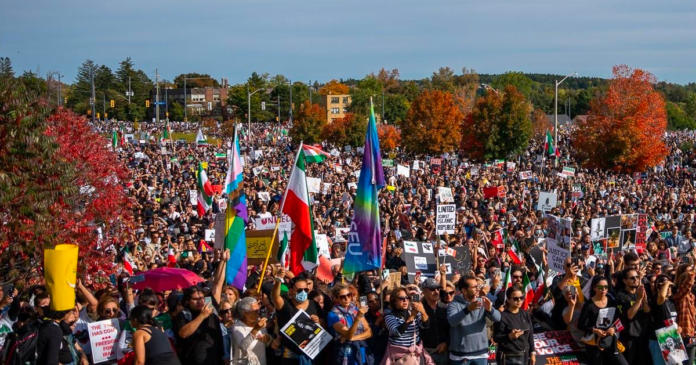 Canadians have come out in droves to protest the brutal Iranian regime after the death of 22-year-old Maha Amini while in police custody.

According to police estimates, over 50,000 people turned out for a protest in Richmond Hill on Saturday.

Protests in Iran have been raging for weeks after Amini died shortly after being arrested for violating the Islamist theocracy’s mandatory veiling laws.

The protest in Richmond Hill was put together by the group Iranian-Canadians for Justice and Human Rights in front of Richmond Hill Central Library.

Conservative Leader Pierre Poilievre was also in attendance at the protest.

“The time has come for all of us friends of freedom to gather around because the time has gone for too long. Too long we have allowed the tyrants in Tehran to terrorize the people, to steal their rights and to engage in extrajudicial arrests and disappearances,” said Poilievre.

Similar protests also took place in Montreal, Vancouver and elsewhere throughout Canada over the weekend.

“(The protest was organized to) bring together Canadians of all ages, races and religions to speak out in defense of the people of Iran, particularly its brave women,” said one organizer.

“As Iran’s regime shuts off the internet in the country and kills protesters indiscriminately, the people of Iran have repeatedly asked that the international community be their voice and amplify their demands.”

Last week, the Conservatives came out in support of a regime change after calling on the government of Prime Minister Justin Trudeau to list the Iranian Revolutionary Guard Corps as a terrorist entity.

“Yes, and if you can’t be unequivocal about a brutal religious dictatorship who kills their own people, then I’m not sure what we’re all discussing here,” said Conservative deputy leader Melissa Lantsman about the prospect of regime change.

On Monday, the Liberals expanded the list of sanction targets to include 34 individuals one week after they announced new retaliatory measures against Iran’s morality police.

“These sanctions are in response to gross human rights violations that have been committed in Iran, including its systematic persecution of women and in particular, the egregious actions committed by Iran’s so-called ‘Morality Police,’ which led to the death of Mahsa Amini while under their custody,” the federal government wrote.