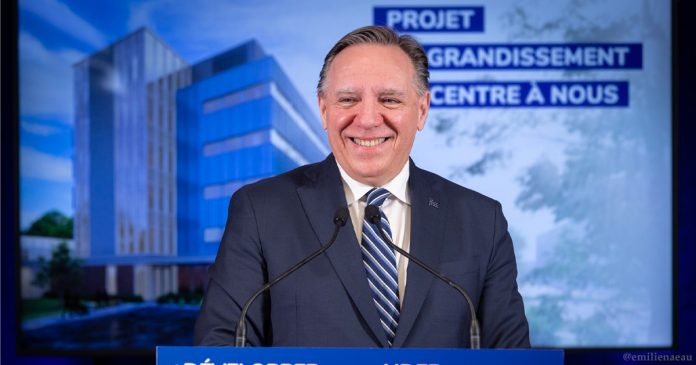 Quebec Premier Francois Legault has been re-elected – with his Coalition Avenir Quebec (CAQ) party winning a second majority in the province’s National Assembly.

Radio Canada called the election in Legault’s favour at 8:10pm, projecting both his re-election and a second majority.

Meanwhile, the left-wing Quebec Solidaire party won 11 seats, up one from 2018. The seperatist Parti Quebecois party won only three seats, amounting to a loss of seven.

The disparity between popular vote share and seats won can be attributed to the first past the post voting system in which the candidate with the most votes in an individual riding wins, irrespective of margin.

While the Conservative Party of Quebec performed well in the popular vote, it failed to win a seat – with its leader Eric Duhaime being defeated in the riding of Chauveau where he had hoped to unseat the incumbent CAQ member of the national assembly.

In his speech Monday night, Duhaime said that his party’s popular vote gains signal a moral victory, stating “all the other opposition parties lost votes; we’re the only opposition party rising tonight.”

He also announced his intentions to stay on as Conservative leader, telling his supporters “I’ll need you even more in the next four years.”

Meanwhile, Legault said in his victory speech that “Quebecers had a very clear message: let’s continue!”

The nationalist premier also claimed that “when I say Quebecers form a great nation I mean all Quebecers from all regions, of all ages, of all origins. I’m going to be the premier of all Quebcers.”

Legault’s win comes after a 36-day campaign where the CAQ maintained strong leads in the polls.

The Premier was not exempt from criticism and protest during the campaign, after a controversial first term where he implemented policies some deemed divisive.

The Legault government passed Bill 96, a French language law which critics claim will negatively impact Anglophones and Allophones, and Bill 21, a secularism law which some say infringes on religious freedoms.

The CAQ also faced criticism for their handling of the COVID-19 pandemic.

They imposed some of the most punitive restrictions in the western world, along with some of the strictest vaccine mandates in North America. Despite these measures, Quebec has the highest Covid death count in Canada.

Days before the election, a Radio Canada investigation also revealed that McKinsey & Company, a global consulting firm with ties to Pfizer, the WHO, the WEF and the Bill & Melinda Gates foundation, played an important role in Quebec’s pandemic response.

Opposition to the CAQ’s handling of Covid also contributed to the rise of the Quebec Conservatives.

However, Legault has earned praise for being one of the few politicians in Canada to tackle wokeness. Earlier this year, his government introduced a bill to protect academic freedom – which allows professors to use any words while teaching, including language that some may find offensive.