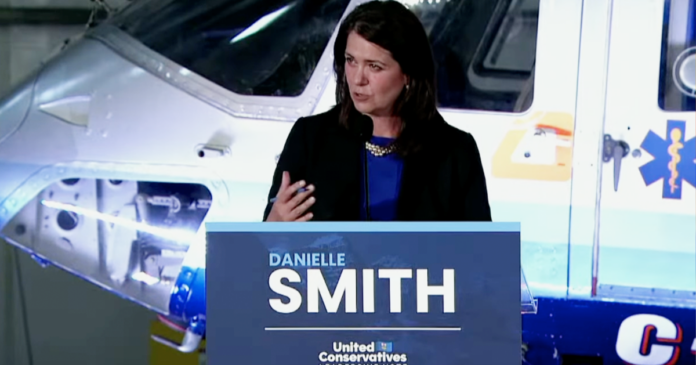 Danielle Smith will be Alberta’s next premier after winning the United Conservative Party leadership contest on the sixth ballot with 53.8%.

UCP MLA Leela Aheer fell off the ballot first with 1.7%. UCP MLA and former Transportation minister Rajan Sawhney fell off second with just 2.6% of the vote.

Smith was the expected winner and led in the polls since Premier Jason Kenney announced his resignation in May, triggering the five-month long leadership race. He triggered the race after barely surviving a leadership review with 51.4% of party members’ support.

Smith’s comeback follows a six-year political exodus after she crossed the floor as leader of the Opposition Wildrose Party to join Jim Prentice’s Progressive Conservatives. The move was widely condemned and Smith lost her riding nomination the following year. The PCs then lost the general election to the NDP and some Albertans blamed Smith.

Smith spent the interim years speaking directly to Albertans as a radio host. She gained popularity for pushing back against the COVID-19 narrative and for criticizing government decisions, such as the imprisonment of pastors.

Her campaign promised to shake up the Alberta establishment, building on her commentary throughout the pandemic.

Smith pledged to overhaul Alberta Health Services, to never lockdown the province again and to never enforce vaccine mandates — and to change regulation so it becomes illegal to do so. She promised to go toe-to-toe with Ottawa, which she said created a constitutional crisis when it blocked Alberta’s constitutionally-protected right to develop its own resources.

Smith also supports the creation of an Alberta police force.

Discussion over her proposed Alberta Sovereignty Act dominated the UCP leadership. Smith has said the act will be her first piece of legislation. It seeks to bar federal legislation deemed harmful to Alberta and its interests.

Other candidates frequently attacked Smith throughout the campaign over her proposed Act. Weeks ahead of the vote, Toews, Jean, Sawhney and Aheer hosted a joint press conference to criticize the proposal, saying it would reduce investment certainty in Alberta.

Even Kenney waded into the leadership to say the act would make Alberta a “laughingstock.”

Many UCP MLAs endorsed Smith’s opponent Toews, raising concerns about her ability to unite the caucus.

Smith is the only one of the seven candidates who does not currently have a seat in the legislature. She’ll be looking to run in a by-election.