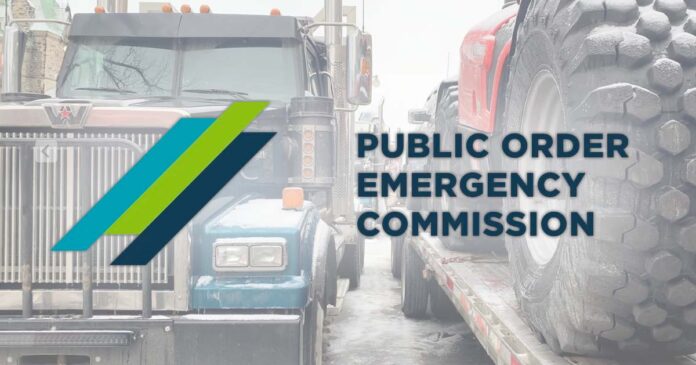 On Day 9 of the Emergencies Act hearings, evidence was presented to the commission showing that Prime Minister Justin Trudeau’s cabinet had a plan for the federal government to meet with protesters the same day that he invoked the extraordinary powers to quash the protests.

On Tuesday, Marcel Beaudin, an inspector and lead negotiator with the Ontario Provincial Police (OPP) revealed that he was asked to assess a proposal that he had worked on with the RCMP to have a federal representative meet with convoy leaders before Trudeau’s invocation.

The proposal stated that protest leaders had to leave the protest zone and denounce any unlawful activity taking place in downtown Ottawa. Upon doing so, a representative of the federal government would commit to meeting with the protest organizers but only to listen to their grievances.

A line specifically states in the proposal that “no negotiations” would take place in this proposed meeting.

Deputy Minister of Public Safety Rob Stewart had reached out to Beaudin during the protests to indicate to law enforcement that there was interest from representatives of the federal government to meet with protest leaders. A meeting which never came to fruition.

Convoy lawyer Brenden Miller informed Beaudin in cross examination that the proposal which had been deemed satisfactory by RCMP Commissioner Brenda Lucki as well as Deputy Minister of Public Safety Rob Stewart was addressed and discussed inside cabinet on the same day as Trudeau’s invocation.

“Did you know that the cabinet and incidence response group of the political executive was meeting and that your proposal was provided to them?” Miller asked Beaudin.

Miller closed his questioning by informing Beaudin, “It was, I can tell you that. And then they invoked the Emergencies Act.”

The testimony indicates that the federal government was given a choice to engage protest leaders in dialogue or pursue last resort emergency measures to quash the protest. Justin Trudeau’s government ultimately chose the latter option.

Beaudin testified as well to intelligence that convoy leader Tom Morazzo told him that he was confident that he could get 60% of the trucks to leave Ottawa. This testimony gives further strength that the proposal put to the federal government to meet with convoy leaders could’ve produced results.

Prior to Miller’s cross examination of Beaudin, commission lawyers pressed Beaudin on his engagement with Deputy Minister Stewart and their collaborative efforts to coordinate a meeting with convoy leaders and federal government representatives.

An email exchange between Stewart and Beaudin indicated that Stewart was concerned about the safety of meeting with convoy leaders, asking Beudin in an email, “would the person going to the meeting be putting themselves at risk?”

Beaudin testified that it wasn’t a concern to him and “there wasn’t a pile of risk there.”

Stewart also asked Beaudin in the February 12th email exchange for a list of convoy leaders that would be at the meeting, but when asked by commission lawyers if Beaudin ever did provide that list to Stewart, Beaudin testified that the meeting had been abruptly called off by the federal government the next day.

“He called me the next morning and said that he was not able to make this happen ultimately,” Beaudin told the commission.

Commission lawyers asked Beaudin if Stewart had given him a reason for calling off the meeting given that OPP was on board, the Ottawa Police Service (OPS) was on board and the RCMP was “provisionally on board”.

Beaudin responded that he was “definitely not involved in the conversations that stopped that from happening.”

OPS inspector Russel Lucas testified prior to Beaudin and commission counsel asked him if he agreed with the intelligence directorate that the level of support for the Freedom Convoy was unprecedented.

Lucas responded by taking aim at the divisiveness of vaccine mandates and public health restrictions.

“The topic of mandates, restrictions, vaccinations is an extremely divisive topic. I’ve seen it in my own family and you see that those challenges arise and it becomes a polarizing topic of discussion.”

Documents made public by the commission today shed light on Ottawa mayor Jim Watson’s plan to seize trucks from protesters and then sell the trucks to cover the city’s costs for dealing with the protest.

In an exclusive True North report, those documents show that the lawyer representing the City of Ottawa, David White, told Watson that there was no “legal authority” to permanently seize a protesters truck and sell it.
Ontario Premier Doug Ford and provincial health minister Sylvia Jones are going to challenge the summons issued to them by the commission using “parliamentary privilege” to duck the summons.

The Ontario Attorney General’s statement yesterday states that Ford intends to “set aside the summons and receive a stay under the grounds the summons are inconsistent with the members’ parliamentary privilege.”

The Emergencies Act hearings resume tomorrow morning at 9:30 am ET.

Senior police officers from the OPS and the OPP are still to testify along with former Ottawa police chief Peter Sloly who resigned from his post during the Freedom Convoy.