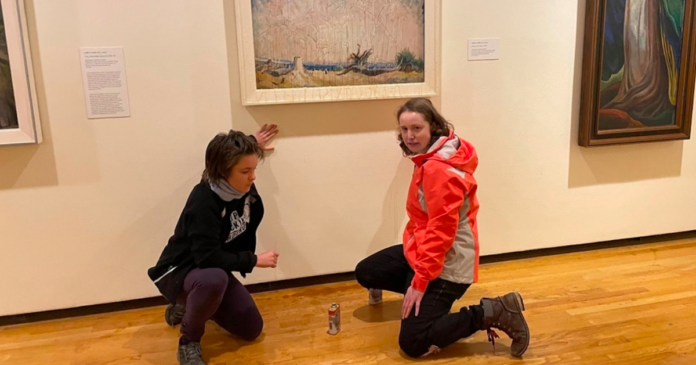 Police are investigating after radical climate activists in British Columbia threw maple syrup at an Emily Carr painting and glued themselves to a Vancouver Art Gallery wall on Saturday.

Other such incidents of environmental protestors vandalizing famous artwork have been reported around the world in recent weeks.

In October, two climate protesters similarly threw a can of soup at a Van Gogh painting on display at the London National Gallery.

According to the group Stop Fracking Around, such incidents are an attempt to alert the public to the dangers of climate change.

“It’s just a question of trying to get the public and especially our leaders to actually respond to the climate emergency which Canada has declared,” said spokesperson Don Marshall.

Protesters called on the government to shut down the Kitimat Coastal GasLink pipeline. The government-approved pipeline has an agreement with all 20 elected Indigenous communities along its route. The painting that was targeted is titled “Stumps and Sky.”

Carr was a painter who often incorporated First Nations subject matter and themes into her artwork.

Indigenous BC Liberal MLA Ellis Ross referred to the act as a “crime (and) vandalism.”

“This is not news. Crime, vandalism, violence, ecoterrorism are condoned in BC,” tweeted Ross.

Police have indicated that they know the identities of the perpetrators and are currently investigating.

“We believe we know who the women are and will conduct a full investigation,” said a Vancouver Police Department representative. “No arrests have been made at this time.”

British Columbia has imposed several anti-energy development policies including a tanker ban along its coastline.

In May, the province’s government-run electricity provider, BC Hydro, bashed the use of natural gas and gasoline vehicles on social media despite regulating several natural gas projects.