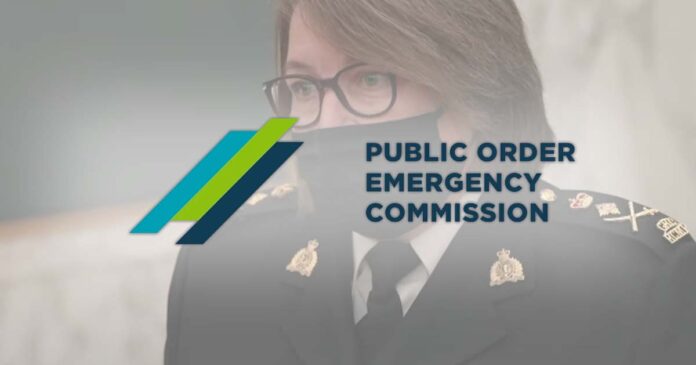 On Day 23 of the Emergencies Act hearings, documents revealed that RCMP Commissioner Brenda Lucki had a plan to clear Freedom Convoy protesters from Ottawa without the use of the never-before-used Act but it was never communicated to cabinet prior to the invocation of the Act.

Commission lawyers focused their examination of Lucki on her communication with the federal government throughout the protest to determine whether the RCMP had exhausted all available law enforcement tools prior to the invocation and whether that had been clearly communicated to cabinet.

“Your update to cabinet as it is deciding whether to invoke the Emergencies Act is that the police now have a plan, and that you as the commissioner of the RCMP consider that plan to be workable without the authorities of the Emergencies Act and your messages don’t get delivered to cabinet when they then deliberate on the invocation of the act,” said Commission lawyer

“You appreciate the significance of that scenario?”

“Yes and no,” Lucki told the commission. “The fact that we now had a plan – I’m not sure if it was signed off either as of that point because we were having difficulty having it signed off, we didn’t realize it needed to be signed off.”

Commission counsel continued to press Lucki on the fact that her plan had not been clearly communicated to cabinet before the invocation of the act.

“You appreciated the significance, I assume, of the fact that you hadn’t got a chance to give those key messages that we have looked at before. Did it occur to you that you should make sure that the government was aware of your views on these points before it came to land on the invocation of the Emergencies Act?” Commission counsel asked Lucki.

“I guess in hindsight, yeah that might have been something significant,” Lucki said. “Honestly, I’m not sure that it would’ve changed anything.”

It was also revealed that Lucki wrote in an email to public safety minister Marco Mendicino on February 13 – just one day prior to the invocation of the Emergencies Act – that law enforcement “had not yet exhausted all available tools through the existing legislation.”

Lucki’s email to Mendicino reads, “That said, I am of the view that we have not yet exhausted all available tools that are already available through the existing legislation.”

“There are instances where charges can be laid under existing authorities for various Criminal Code offenses occurring right now.” Lucki also wrote in that email.

Lucki’s email also states that existing laws in place are being considered in the policing plan to clear protesters from Ottawa.

“These existing tools are considered in our existing plans and will be used in due course as necessary.”

Also on February 13, according to Commission documents, Lucki wanted Mendicino to know that the RCMP did not need the Emergencies Act to clear the border blockades at Coutts and Windsor.

It was revealed that during the cabinet meetings and at the integrated response group meetings on February 13 and February 14, Lucki was in attendance at those meetings but was not invited to speak.

Following Monday’s revelation that the Canadian Security Intelligence Service (CSIS) told cabinet that the Convoy did not constitute a threat to national security just one day prior to the invocation of the Emergencies Act, Convoy lawyer Brenden Miller asked if Lucki ever told Mendicino that she had thought that the Convoy was a threat to national security as defined by Section 2 of the CSIS Act.

In response, Lucki said, “No, he would have to ask CSIS.”

“Right, and CSIS told him, you are aware, that there wasn’t,” Miller asked Lucki.

Testifying beside Lucki today was the deputy commissioner of the RCMP Mike Duheme.

Hearings resume tomorrow at 9:30am ET.

Still to testify this week are other deputy commissioners of the RCMP and senior officials from the Department of Public Safety.