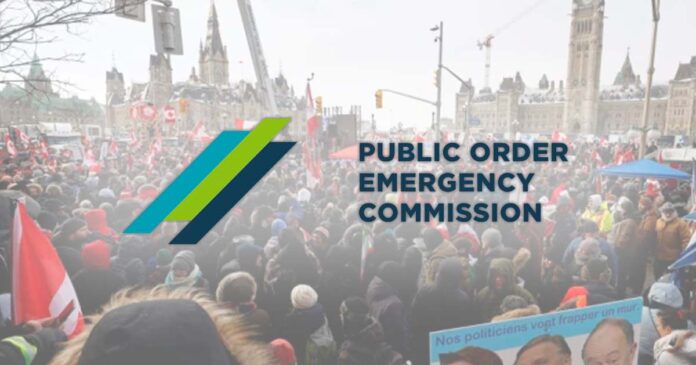 On Day 27 of the Emergencies Act hearings, Canadian Security and Intelligence Service director David Vigneault confirmed that he advised Prime Minister Justin Trudeau to invoke the Act despite acknowledging that the Freedom Convoy did not meet the threshold of a national security threat.

Vigneault advised the Prime Minister to invoke the Act on Feb. 13 – the day before Trudeau did so – while also stating clearly that a threat to national security as defined by Section 2 of the CSIS Act was not met.

When asked by Trudeau on Feb. 13 if he supported the decision to invoke the Act, Vigneault’s in-camera witness summary reads: “Mr. Vigneault explained that based on both his understanding that the Emergencies Act definition of threat to security of Canada was broader than the CSIS Act, as well as based on his opinion of everything that he had seen to that point, he advised the Prime Minister of his belief that it was indeed required to invoke the Emergencies Act.”

Prior testimony at the inquiry and evidence heard by the commission from Deputy Minister of Public Safety Rob Stewart indicates that Vigneault told cabinet on the 13th, “at no point did the Service assess that the protests in Ottawa or elsewhere constitute a threat to national security as defined by Section 2 of the CSIS Act,” and “CSIS cannot investigate activity constituting lawful protest.”

Under questioning from Justice Centre for Constitutional Freedoms lawyer Hatim Kheir, Vigneault was asked to explain how he could advise Trudeau to invoke the Act while also acknowledging in cabinet on the same day that the Convoy did not meet the legal threshold of a threat to national security required for the government to be justified in invoking the Act.

“The protest itself did not post a Section 2 threat to the security of Canada,” Kheir asked Vigneault.

“What we testified to is that we did not make a determination of the event itself – it is part of our testimony,” Vigneault responded.

“And yet you still advised the Prime Minister to invoke the Emergencies Act?” Kheir followed up.

“Yes, I did,” Vigneault responded.

“My testimony was based in part on that, but it was also based on all the other information I became aware of during all the other departmental meetings,” Vigneault responded.

The Canadian Civil Liberties Association – an organization given standing by the Commission – released a statement Monday concerning the revelations surrounding Vigneault’s testimony.

“The government’s argument appears to be that the Emergencies Act doesn’t mean what it says. It is relying on this novel interpretation to justify its decision to invoke,” the statement reads.

Testifying after Vigneault was minister of Emergency Preparedness Bill Blair, the first cabinet minister to testify at the Emergencies Act hearings.

Meeting notes disclosed at the inquiry between Blair and his counterparts in provincial and municipal governments revealed that the minister made a point of telling everyone involved to “keep the language down.”

Commission counsel asked Blair to explain further what this meant.

“I was concerned that inflammatory language could incite a more violent response,” Blair said.

“So minimize name calling, that sort of thing? Keep the language down, keep the rhetoric moderate on the government side?” Commission lawyers asked Blair.

“Quite frankly, I’m always concerned about fear,” Blair responded. “My advice to my colleagues was that we remain tempered in our language.”

This testimony flies in the face of comments made about the Freedom Convoy by Trudeau prior to the Convoy arriving in Ottawa and throughout the three week protest. Trudeau famously labeled the protesters as a “small fringe minority” who held “unacceptable views.”

One week into the Freedom Convoy protests, Trudeau accused the protesters in Ottawa of wearing “tin foil hats”.

When asked by Commission lawyers about the public enforcement operation carried out by law enforcement officials to clear the Freedom Convoy from Ottawa, Blair described the operation as “textbook,” “professional” and “proportional”.

During the public enforcement operation in Ottawa, riot cops on horseback trampled on two protesters, enforcement officers shot a journalist with a tear gas canister, and one officer was seen on camera beating a protester with his rifle.

Testifying alongside Vigneault Monday morning was Michelle Tessier, the deputy director of operations at CSIS and Marie-Helene Chayer, the executive director of the CSIS Integrated Terrorism Assessment Centre.

Hearings will resume tomorrow morning at 9:30 am ET.