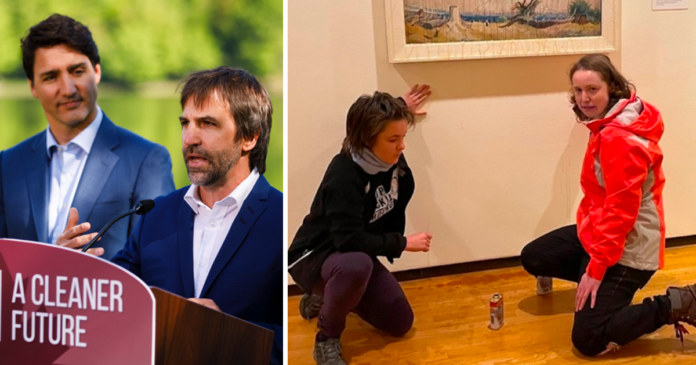 When the Taliban reclaimed Afghanistan last year, the country’s artists quickly scrambled to hide their creations or even destroy them. They knew what was to come.

Whenever the Islamic extremists had surged to power in the past, they moved swiftly to desecrate statues, paintings and other forms of artistic expression throughout the country – both in people’s homes and private galleries as well as throughout public institutions.

The most infamous example of the Taliban destroying culture came when they tore down the massive Buddhas of Bamiyan statues, which climbed some 50 feet high into the sky.

That desecration garnered a lot of headlines when it happened in 2001. Yet, 20 years later, it’s not the Taliban’s destruction of art that’s making the news (although they’re no doubt still at it). Now it’s environmental activists who are destroying culture in their pursuit of an extremist agenda.

This past year activists in England, Europe and Australia have vandalized artwork by legendary painters including da Vinci, Van Gogh, Botticelli, John Constable and Andy Warhol. And it’s now come to Canada.

Earlier this month, two extremists from British Columbia threw maple syrup on a painting by Emily Carr at the Vancouver Art Gallery.

What’s bizarre is that so far there have been no charges despite the fact the attackers have not only been identified but gone on to publicly brag about their acts.

The anti-oil organization Stop Fracking Around actually distributed a photo to media outlets of Erin Fletcher and Emily Kelsall posing proudly before their vandalism.

Kelsall, who has been writing this year for the online Canadian publication the National Observer, even gave an interview to CBC rationalizing the attack.

“I think any amount of publicity we can get as an organization is worth it because the climate crisis is the most pressing crisis of our time,” Kelsall said.

This obviously doesn’t make any sense. Then again neither do the edicts of the Taliban.

We can and should hold Fletcher, Kelsall and all the other art vandals accountable for their misdeeds. But we also need to address how these things aren’t happening in a vacuum.

The rhetoric around climate issues has stepped up in recent years. It’s now commonplace for mainstream news sites and politicians to cavalierly toss around phrases like “climate disaster” and even “climate apocalypse.”

This sort of language messes people up. The Intergovernmental Panel on Climate Change’s annual report now includes a section on how pondering all of this climate talk is causing mental health challenges among some people.

When it comes to Canadian politics, Prime Minister Justin Trudeau has such a disproportionate fixation on the issue that he’s not only content to jack up the current carbon tax and bring in a second one (the Clean Fuel Standard) as consumers already grapple with inflation, but he’s willing to risk our food supply by threatening to mandate fertilizer reduction.

So what’s a little damaged art along the way? Engaging in all sorts of random ritualistic acts of cultural desecration is just par for the course if you believe the apocalypse is imminent.

Maybe – here’s a crazy thought – we rein these nutters in a bit by cooling the rhetoric.

The bulk of the reporting on the Emily Carr attack was written up as if it was a rational, if slightly inappropriate action. That’s a problem.

And it doesn’t seem like Trudeau or Environment and Climate Change Minister Steven Guilbeault have signaled any sort of disapproval to it. While I don’t think cabinet ministers should be randomly tweeting about breaking events, the truth is that they already do it when it fits their narrative and appeals to their base.

Guilbeault is an elder statesman of the climate protest crowd. Every political watcher has by now seen that image of Guileault smirking like the Joker as he’s being taken away by police from the base of the CN Tower for an illegal stunt he performed there.

Is Guilbeault quietly applauding the art vandals? Maybe. Or maybe he disapproves. If he does think it’s too much, he should say so. His words would go a long way.

Until then – until someone like Guilbeault or Trudeau or David Suzuki tells the zealots to simmer down – the Taliban-lite tactics will likely continue. Let’s just hope they don’t get worse.