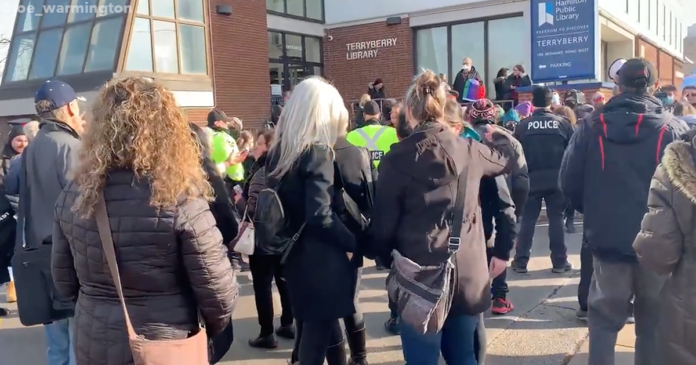 Protesters appeared outside of the Terryberry Library in Hamilton on Thursday to demonstrate against a drag queen story time that had been advertised to “gender variant” 0 to 4-year-olds.

A video posted by Toronto Sun journalist Joe Warmington shows demonstrators facing down supporters of the event as police officers watched on.

As first reported by True North earlier this week, the event was billed as a “family-friendly” drag queen story hour by the Hamilton Public Library.

Videos of the incident show protestors chanting “leave the kids alone” outside of the event.

An advertisement posted by the official Hamilton Public Library Twitter account on Nov. 14 notes an earlier drag storytime held at the Binbrook Branch.

In subsequent comments to complaints from residents, the library stated that the storytime aligned with the library’s “strategic plan to be a community hub.”

“Hi, many children are and/or have 2SLGBTQ+ people in their everyday lives. The Drag Storytime program aligns with HPL’s Strategic Plan to be a community hub,” the library tweeted on Nov. 15.

Similar events have been held throughout Canada.