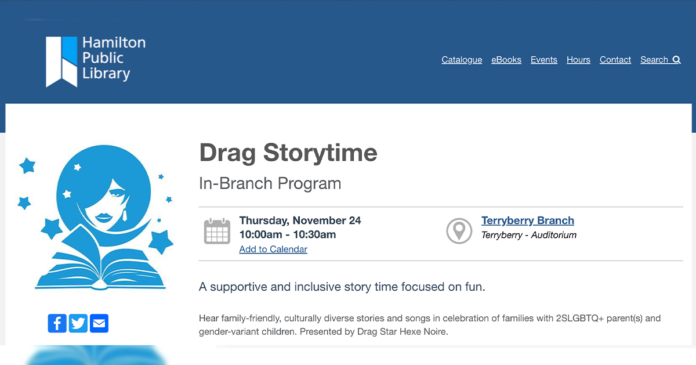 On Thursday the Hamilton Public Library (HPL) will host what’s being billed as a “family-friendly” drag queen storytime advertised to “gender-variant” 0 to 4 year olds.

According to the event page, performer Hexe Noire will be leading the “supportive and inclusive storytime” at the city’s Terryberry Branch.

Drag queen story times have faced scrutiny from parents in recent months over concerns that children are being targeted by gender ideology.

As exclusively reported by True North in August, Quebec drag queen Sebastien Potvin, also known as Barbada de Barbades, has been reading to children in libraries for years.

“The thing is if I don’t do it, you know, be in a very respectful way for the kids… in a way with words that they understand, in words that they comprehend in order to understand at their level what drag is, they’re gonna learn anyways,” Potvin told True North.

Meanwhile in British Columbia, a youth pride dance advertised to children in grades K-12 explicitly restricted parents and guardians from attending the event due to “privacy and safety concerns” for LGBTQ+ youth.