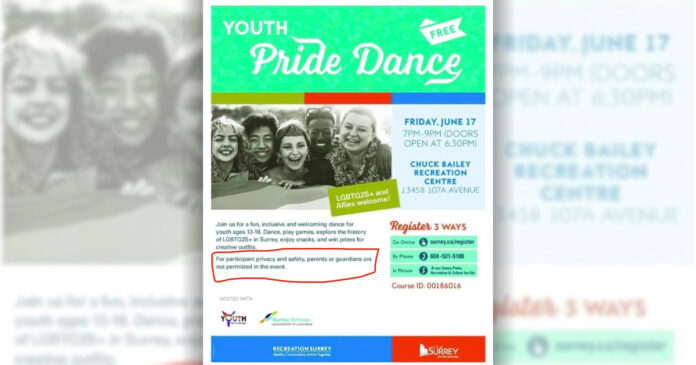 “For participant privacy and safety, parents or guardians are not permitted in the event,” the flier states.

The city-sponsored event is being advertised as a way for children to explore the LGBTQ+ community and is enticing kids to attend for snacks and prizes.

“Join us for a fun, inclusive and welcoming dance for youth ages 13 to 18! Dance, play games, explore the history of LGBTQ2S+ in Surrey, enjoy snacks, and win prizes for creative outfits. LGBTQ2S+ and allies welcome,” an event description explains.

Hosts include Surrey Schools and Youth for a Change.

The “Youth Pride Dance” is among several LGBTQ+ events for children across Canada this month.

The event description says that the event is an “interactive storytelling and dance performance” where the stories that are read “encourage children [to] celebrate our differences”. A photo booth and face painting area were also set up for the drag performers to interact with the children.

“June is Pride Month. Come meet and listen to the magnificent, one-and-only drag queen Barbada, who will enthrall you with her wonderful stories.” reads the Dorval public library’s website.

Earlier this week, the only black six-term trustee on the Waterloo Region District School Board (WRDSB) Mike Ramsay was cancelled by woke school board trustees for questioning some of the board’s decisions.

Ramsay, who shared True North stories about woke ideology at the WRDSB, was sanctioned by fellow trustees due to an anonymous complaint.

WRDSB Chairman Scott Piatkowski is currently the subject of a $1.7 million defamation lawsuit filed by 20-year teacher Carolyn Burjoski after Piatkowski shut down her presentation regarding her concerns about overly sexualized books in elementary schools.

Burjoski alleges she was called “transphobic” because of her presentation.

“In publishing these false and defamatory statements, Piatkowski and WRDSB ought to have known that such statements would ferment hatred, ridicule and contempt for Burjoski,” the claim states.