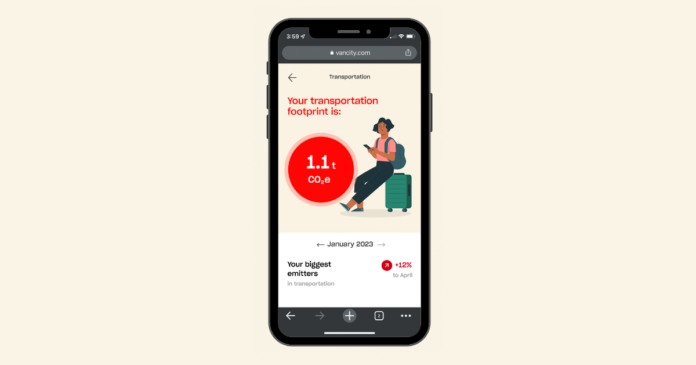 It will be first available for consumers in 2023 and will allow cardholders to track estimated carbon emissions on every purchase.

“Members will be able to see how their monthly tally compares to the national average, or which credit card purchases have the highest environmental cost,” said a statement by Vancity.

“The Carbon Counter will help Vancity card holders understand the carbon footprint of their purchases as well as provide advice on what they can do to reduce their emissions footprint.”

The credit union partnered with the sustainability tech company Ecolytiq, which has worked with other banks to create personalized environmental footprints for consumers.

The initiative is the first of its kind for a Visa card in Canada, but the concept has been floated elsewhere.

As first reported by True North, an executive with the Chinese e-commerce giant Alibaba revealed at the World Economic Forum earlier this year that the company was working on an individual “carbon footprint tracker.”

“We’re developing through technology an ability for consumers to measure their own carbon footprint,” said president J. Michael Evans.

Critics of individualized carbon trackers have warned that the technology could pose a threat to privacy rights.

Conservative MP Leslyn Lewis has been an outspoken critic of governments introducing technology that violates the rights of citizens.

In an open written while she was running for the party’s leadership, Lewis blasted Prime Minister Justin Trudeau for using the pandemic to launch a “socialist coup.”

“Many Canadians rightly fear the repercussions of Trudeau transforming Canada into a cashless society,” said Lewis.

“They have told me that they are afraid the Liberals will impose a social credit score, similar to the one that exists in China.”