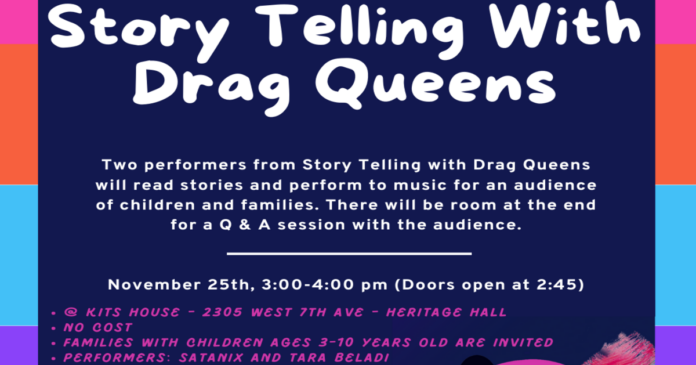 A drag queen story hour advertised to 3-10 year olds in a Vancouver, British Columbia neighbourhood last Friday saw both protesters and counter-protesters gather in front of the facility.

“Two performers from story telling with Drag Queens will read stories and perform to music for an audience of children and families. There will be room at the end for a Q & A session with the audience,” Kitsilano Neighbourhood House wrote in an event advertisement.

Satanix is a prominent BC drag performer who has done several horror-themed shows in the recent past. An Oct. 14 event held by the organization Clowns Kill Empired describes Satanix as being part of Vancouver’s “The Clown Haus.”

Those protesters critical of the event expressed concerns about its age-appropriateness. Parents rights activist Chris Elston was present at the event and in a tweet on Friday blasted the community charity for hosting the drag queen story hour.

“Why is Kits House, a community-funded charity, spending donors’ dollars so deviant men can larp as hyper-sexualized women in front of preschoolers and kindergarteners? Why is Satanix treated as leftist royalty, and given an audience of little children?” tweeted Elston.

While the event was peaceful, counter-protesters were also present in support of the drag queen story time.

“We celebrate diversity and treat everyone with respect. We strive to be allies with the 2SLGBTQ+ community, standing side by side, in the fight against homophobia,” claimed Kitsilano Neighbourhood House in a post on the event.

“Unlike other marginalized groups facing acts of hatred 2SLGBTQ+ people do not always have the support of their families, underscoring the importance of ally-ship.”

Kitsilano Neighbourhood House is a community non-profit that hosts various events such as seniors’ lunches and childcare services. The organization receives taxpayer funding from BC government and City of Vancouver grants.

The protests came only days after a similar event in Hamilton saw demonstrations over a drag queen story time advertised to “gender variant” 0 to 4 year olds.

Despite the opposition, the library defended the event saying that it aligned with its “strategic plan to be a community hub.”

“Hi, many children are and/or have 2SLGBTQ+ people in their everyday lives. The Drag Storytime program aligns with HPL’s Strategic Plan to be a community hub,” the library tweeted on Nov. 15.