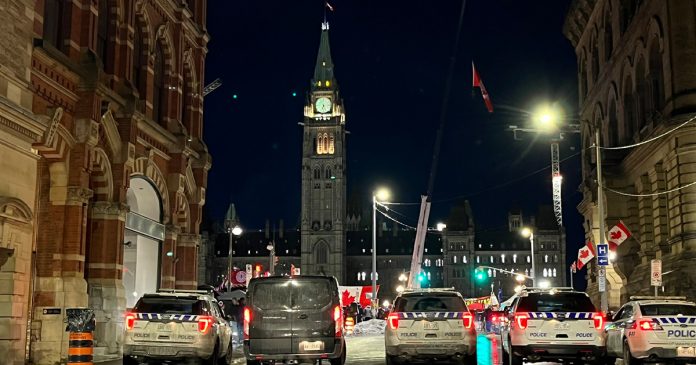 With the Public Order Emergency Commission’s fact-finding hearings now concluded, Commissioner Paul Rouleau has until February to deliberate and issue his report. While there is no precedent for the Emergencies Act’s use, the law spells out the threshold needed for its use to be justified.

Understanding this requires looking at the Emergencies Act as well as the Canadian Security Intelligence Service Act.

Under section 16, a “public order emergency means an emergency that arises from threats to the security of Canada and that is so serious as to be a national emergency.”

This is where the CSIS Act comes in. The Emergencies Act says the term “threats to the security of Canada” “has the meaning assigned by section 2 of the Canadian Security Intelligence Service Act.”

The CSIS Act is clear that its definition of security threats “does not include lawful advocacy, protest or dissent” unless that protest incorporates any of the four listed activities.

While the convoy did receive donations from the United States and elsewhere, the Commission heard that the meaning of “foreign influenced activities” refers specifically to influence by foreign states, not protest sympathizers who happen to live in other countries.

Even if there exists a “threat to the security of Canada” as defined by the Emergencies Act and CSIS Act, the former requires it rise to the level of a “national emergency,” which has its own definition.

From section 3 of the Emergencies Act:

For the purposes of this Act, a national emergency is an urgent and critical situation of a temporary nature that

In the federal government’s closing arguments Friday, the government’s lawyer said that there were threats to public safety in Ottawa and other protest sites across the country. He also argued that the government considered all other alternatives under existing authorities and found them to be inadequate.

There is a caveat in section 17(1) of the Emergencies Act, which is that the Governor in Council – the cabinet – ”believes, on reasonable grounds” that the threshold has been met.

This distinction was subject to a fair bit of scrutiny in the closing weeks of the Commission, especially with conflicting information coming from CSIS. CSIS found that there was no threat to the security of Canada as defined by the CSIS Act, but CSIS director David Vignault nonetheless recommended the invocation of the Emergencies Act.

National security and intelligence adviser Jody Thomas testified that the CSIS definition of security threats was “very narrow and outdated” and should be updated, though it is still the law of the land.

Rouleau’s report is due by statute February 20, 2023, the anniversary of the revocation of the public order emergency.