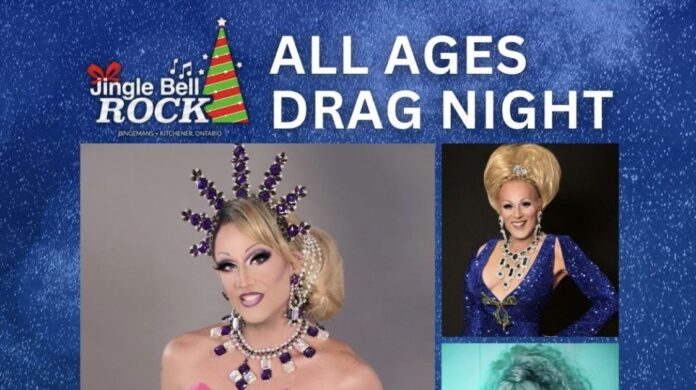 A drag performer who headlined an Ontario government funded “all ages drag show” at an entertainment complex in Kitchener wants to sit down with critics after the event drew protesters and online criticism yesterday.

On Dec. 1, Bingemans held the drag show as part of a series of Christmas programming events funded in part by the province.

Advertising for the event states that: “Funding (was) provided by the Government of Ontario.” Additional sponsorship was provided by Libro Credit Union.

Drag performer Bradley Hamacher, known locally as “Miss Drew”, has been a longtime performer and has held drag queen story hours for kids in the past.

“I think it’s important we tell the young ones it’s okay to be me,” said Hamacher.

According to Hamacher, he “would like to talk” to opponents and reach some dialogue.

When asked if he had any concerns about whether minors could be exposed to the content, Hamacher said it was up to the parents to monitor what their children do or see online. He also noted those events were advertised to adults only and were not open to minors.

He says that while Thursday’s show went on without a hitch and helped fundraising efforts, some protesters gathered outside to voice their opposition.

“(They) did come out and it was really, really cold last night,” said Hamacher.

Hamacher also told True North that he’s concerned about the rhetoric in light of shootings targeting the LGBT community, including the recent Colorado Springs shooting at Club Q last month. The performer also mentioned receiving threats as a result of the event.

On social media, former MPP Belinda Karahalios criticized the event on Twitter, saying drag shows are not appropriate for all ages “by their nature.”

Other recent drag queen events advertised to minors have led to protests throughout Canada.

“Two performers from story telling with Drag Queens will read stories and perform to music for an audience of children and families. There will be room at the end for a Q & A session with the audience,” Kitsilano Neighbourhood House wrote in an event advertisement.

The non-profit event venue that hosted the drag queen story hour receives taxpayer funding from the BC government and the City of Vancouver via grants.