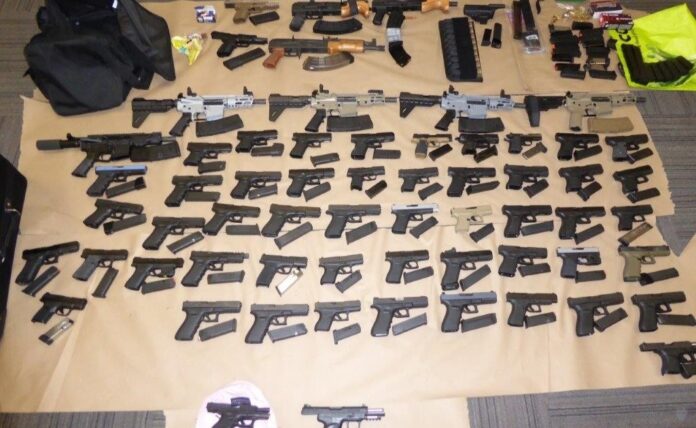 The Toronto Police Service (TPS) announced on Monday that it had arrested six people believed to be involved in an illegal firearms trafficking ring.

According to the Organized Crime Enforcement Unit, the arrests came after an eight-month operation codenamed “Project Barbell.”

A total of 62 firearms were seized as a result of a May 28, 2022 bust. Six individuals ranging from 27 to 62 years of age were arrested and face nearly 260 criminal charges.

“Gun violence continues to be the most significant public safety concern for the people of Toronto. Every one of these guns was destined for our streets; our communities,” said TPS Chief James Ramer.

“Toronto Police remain fully committed to working with our partner agencies, and all levels of government, on prevention and addressing root causes for those who are at-risk. But let me be clear, we are equally committed to targeting those who are high-risk; those who choose to carry and to use illegal guns in our neighbourhoods.”

All of the guns seized by the TPS are already illegal to own in Canada.

Those arrested include a suspect wanted for questioning in a reckless shooting incident at a Queen Street West bar last year.

Among the accused are 27-year-old Syed Mohammed Ali Zaidi who faces various charges including possession for the purpose of weapon trafficking, 51 counts of possession of a loaded prohibited or restricted firearm, conspiracy to commit an indictable offence and other charges.

Zaidi was also charged in relation to a Oct. 19, 2021 shooting with discharge of firearm being reckless to the life or safety of another person, pointing a firearm and various other possession related charges.

Suspects have been ordered to appear in court this Friday at 10 a.m.

Toronto has seen a major uptick in gun-related crime and violent shootings in recent years. In 2022 there have so far been 364 shooting incidents in the city with 41 deaths and 146 injuries reported.

A recent amendment to the law seeks to ban a wide range of firearms used by hunters and sportshooters.

Various policing experts have doubted the effectiveness of such regulations including Toronto Deputy Police Chief Myron Demkiw, who earlier this year told the House of Commons that bans on firearms like handguns is “not going to deal with the crime problem” the city faces.

“Our problem in Toronto are handguns from the United States,” said Demkiw.