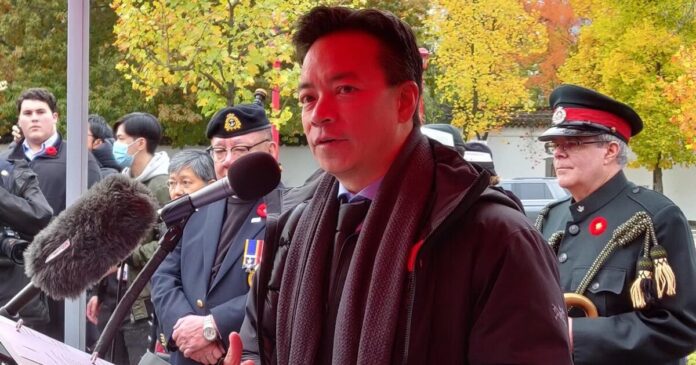 Vancouver City Council passed a motion to require police officers in the city to be equipped with body cameras after receiving overwhelming support by Mayor Ken Sim and associated councillors.

On Wednesday, the motion was passed to a standing committee for debate and an eventual vote. Seven out of ten ABC Vancouver city councillors, including Zhou, voted to approve the plans. Three councillors held out. ABC Vancouver is a registered municipal party.

Zhou hopes that body cameras will be worn by all front-line and patrol officers by 2025.

The motion itself calls on Mayor Sim to notify the Vancouver Police Board of Council’s support for the policy and to initiate the program’s implementation by working with stakeholders.

A report with information and recommendations is expected by early 2024.

During this fall’s municipal election, the pledge to introduce body cams on all VPD officers by 2025 was a key part of Sim’s tough on crime message.

”I do support body cameras in the sense that they do reduce investigation costs, they hold people accountable—police officers and the general public,”  Sim said during Wednesday’s debate on the matter.

Vancouver has been reeling from a spike in violent incidents which has resulted in four random attacks on strangers per day according to police statistics from last year.

“Over the last few months, we’ve noticed what appears to be an uptick in unprovoked stranger attacks, so we asked our strategic researchers to take a deep dive into the numbers. What they found is concerning: over four people a day are the target of a random, unprovoked assault,” wrote the VPD on Twitter.

“Subsequent to the discontinuation of the SLO program in June 2021, the city has seen a marked increase in incidents involving Vancouver youth, leading the (Vancouver Police Department) to raise an alarm in the spring of 2022 in response to a series of “troubling and violent” swarmings, robberies, and attacks on teens,” wrote Trustee Preeti Faridkot.