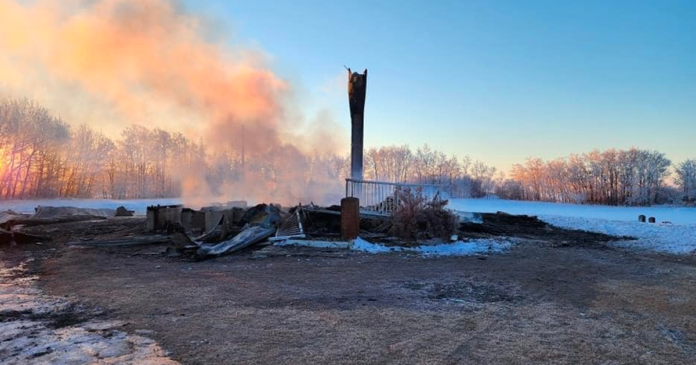 Another church in Canada has been set ablaze and destroyed.

The church was originally built in 1915.

First responders arrived on the scene at 11:30 pm and found the church “completely engulfed in flames.” Wetaskiwin RCMP say the fire was intentionally set.

“Despite efforts of the first responders, the church was completely burned,” an RCMP release stated.

Hay Lakes Fire Chief Bryce Wolfe told the Canadian Press that nobody was hurt in the incident, but questioned why anybody would burn down a church.

“Main concern is no one was hurt, but at the same time it’s a lot of history loss…a lot of the community around here has been involved for generations,” said Wolfe.

“What is the motive…for burning down a church?”

In 2021, True North compiled a map of the nearly 70 cases of arson and vandalism targeting churches across Canada since the announcement of the apparent discovery of graves found near a residential school in Kamloops, BC.

In May 2022, Conservative MP Dane Lloyd grilled officials from the Canadian Security Intelligence Service (CSIS) and Public Safety Canada for ignoring the torching of churches across the country.

“It would be nice to have a statement of at least concern for these communities from CSIS considering the fact that at 4 a.m. in the morning in my town of Morinville over 50 people had to be evacuated from their homes because a church was burned down, and there was a massive threat that a senior’s home apartments were going to be burned to the ground,” said Lloyd.

“This could have been one of the highest mass casualty terrorist events on Canadian soil in our modern history, and yet it doesn’t seem to have merited a single mention by our security service so I want to put that on the record.”