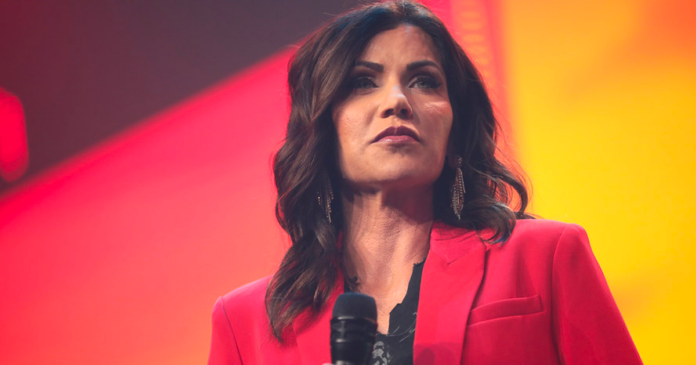 South Dakota Governor Kristi Noem said in her first state address of the year that she is in talks with an unnamed Canadian family-owned company that wants to relocate to her state because of Canada’s strict pandemic response.

On Tuesday, Noem, a Republican, blasted US President Joe Biden for maintaining a vaccine mandate along the country’s borders throughout her speech.

“We’re in touch with a company in Canada that wants to move their business to the Black Hills. I can’t share a lot of details with you yet but we’re very excited about this company. They are currently buying property that they haven’t even seen in person,” said Noem.

“This family and their business have suffered due to the Covid restrictions and vaccine mandates in Canada. Their daughter was even expelled from her university for refusing the vaccine.”

According to Noem, the US government’s ongoing vaccine border mandates are preventing the family from relocating.

“They are ready to gain back their freedoms. They want to grow their business and improve their quality of life right here in our state.The Biden administration’s vaccine mandates are standing in their way,” said Noem.

Last week the US Transportation Security Administration extended its border vaccine mandate for air travel until April 10, 2023 citing the “risk that Covid-19 poses” to the US healthcare system. A vaccine mandate for the land border is currently in place also.

Canada hasn’t had a vaccine requirement for travelers entering the country since October 1, 2022 when the order was lifted after the federal government faced pressure from tourism groups and border communities.

As exclusively reported by True North in August, some Canadians have opted to attempt to claim asylum in the US because they feared Prime Minister Justin Trudeau’s heavy-handed Covid-19 response.

According to Buffalo immigration lawyer Matthew Kolken, he has filed at least half a dozen asylum applications for Canadian clients hoping to resettle in the US permanently.

“(The application) says they’ve either expressed some sort of political speech or a member of a particular social group like unvaccinated individuals that have faced persecution before either through seizing of bank accounts, or loss of employment, or forced quarantines, things of that nature,” said Kolken.