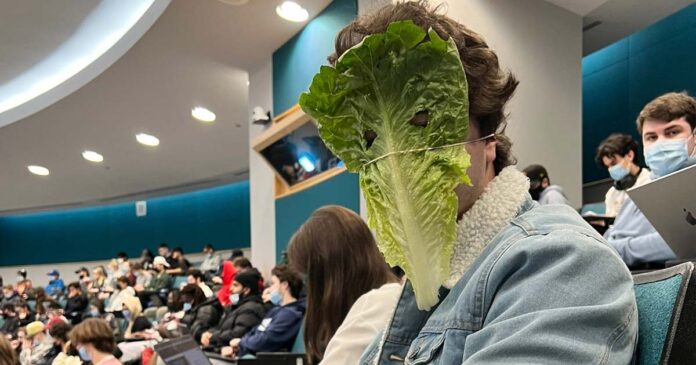 A Wilfrid Laurier University student who has gone viral for using random items as face coverings to mock his school’s mask requirement is planning an in-person protest to demand a permanent end to the mandate.

As of January 2022, Laurier continues to require masking in instructional spaces – almost three years since the pandemic began.

“I want them to withdraw this mandate, I’m tired of students being told what to do,” fourth year philosophy student Kamil Bachouchi told True North. He added that he doesn’t feel like Laurier has the right to mandate masks.

Bachouchi, who was previously kicked out for not disclosing his vaccination status, believes the majority of students are opposed to the mask mandate. However, he says that not enough students are currently speaking out amid some fearing academic repercussions.

“People want this to be over. The only reason it’s not over is because (Laurier is) still holding on to it”.

Bachouchi told True North a number of students have told him they plan on attending his demonstration – which is planned for Sat, Jan. 28, 1pm, at Waterloo Town Square.

Bachouchi’s protest is being held with Students Against Mandates (SAM), an organization which he is a member of. SAM describes itself on its website as a “community of proud critical thinkers who support decision making backed by data.” The group opposes mask and vaccine mandates on college and university campuses.

In addition to planning an in-person demonstration demanding a permanent end to the mandate, Bachouchi is continuing his creative and humorous “peaceful revolution” against the policy – where he wears random items as masks to class. He started the latter last fall after one of his professors warned that maskless students would be kicked out.

His face coverings have included a Ziploc bag, a bucket, a grapefruit, a snorkel, a Spiderman costume and, most recently, a leaf of lettuce. He has also mocked the requirement by wearing 10 masks, a gas mask as well as a hazmat suit.

“The reaction that I had on social media is outrageous to me” Bachouchi told True North, adding that he was not expecting to go viral. “For me, at first, it was just like a way to vent,” he said, noting that he only had a few hundred Twitter followers when he began posting pictures of his face coverings.

In addition to receiving attention from prominent social media users, Bachouchi caught the eye of Laurier’s Dean of Students office. The latter sent him an email in December reminding him of the university’s mask policy and claimed it received complaints regarding his compliance.

“I was following their rules technically, so they let me know that they know… because they couldn’t tell me not to do it,” said Bachouchi.

Bachouchi says he will continue to wear random items as face coverings until Laurier drops the mask mandate, telling True North “I don’t have any plans on stopping.” He also hopes others will join him in not complying or making a joke out of policy.

True North reached out to Wilfrid Laurier University for comment but they did not respond in time for publication.

While posters for the protest say it is being held against both Wilfrid Laurier University and the University of Waterloo’s mask mandates, Waterloo dropped its mandate on Jan. 9.

Campus Watch keeps an eye on what’s happening at schools across Canada. Do you have a story to share about a college or university near you? Let us know at [email protected]