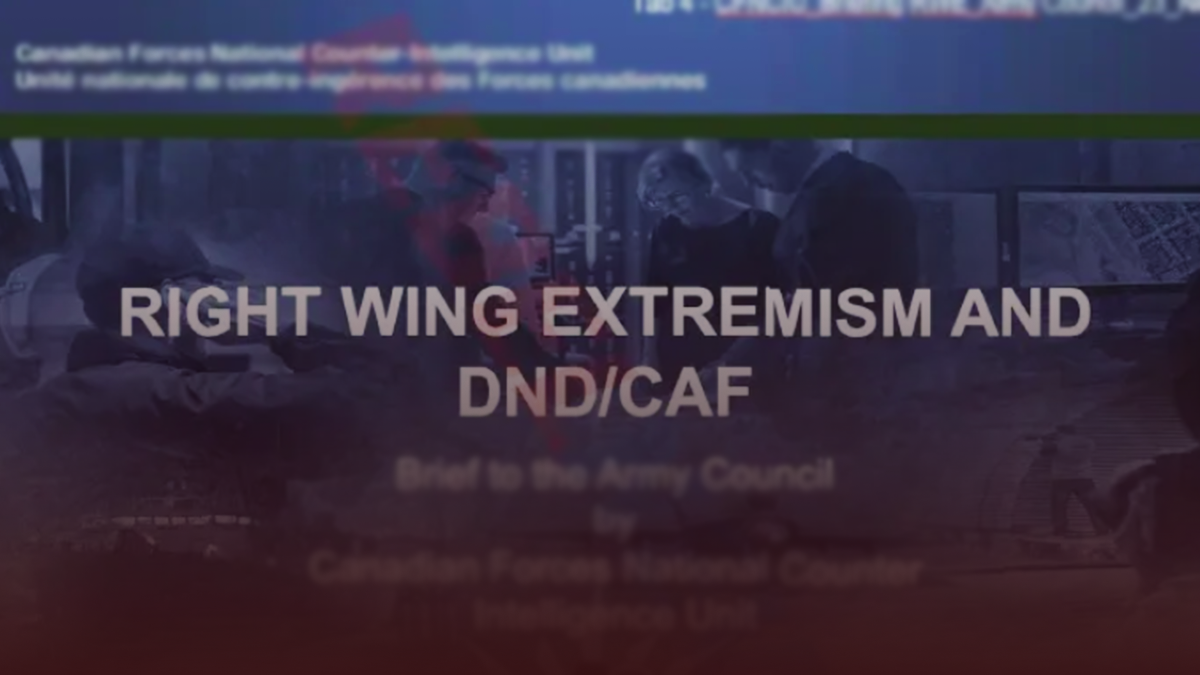 The presentation, titled “Right Wing Extremism and the DND/CFA,” describes the behaviour of certain purported far-right extremist groups and how they relate to the Canadian Armed Forces

Obtained by Rebel News, the presentation puts pro-lifers in the same category as anti-Semites and conspiracy theorists on a “RWE Landscape and Ideologies” page. Also on the page are groups like the KKK, neo-Nazis, and white nationalists.

The presentation also claims opposition to immigration is a form of right wing extremism, though fails to distinguish between groups espousing racist rhetoric and Canadians critical of specific immigration policies.

“RWE activists are generally fueled by conspiracy theories and feel threatened by the government, other religions, leftists or immigrants,” the document says.

With very few examples, the presentation claims that the Canadian Armed Forces has a long history of right wing extremism, claiming extremists are “attracted” to the armed forces.

“RWE have generally been supportive of the military due to perceived shared values such as loyalty, patriotism and brotherhood,” it says.

The only evidence of alleged “attraction” armed forces members have to right wing extremism was one post from an online forum in 2015 where anonymous individual calls the army “fun.”

Less than 10 armed forces members per year are found to be associated with right wing extremism with normally little connection between the individuals in question.

A Department of National Defense spokesperson confirmed to True North that the military considers “pro-life extremism” to be a type of right-wing extremism.

“In the brief, abortion is listed as an example of a single-issue on the spectrum of Right Wing Extremism Landscape and Ideologies, intended as a reference to pro-life extremism,” the spokesperson said in an email. “This has, on occasion, been identified as violent acts against abortion clinics, their staff and clients.”

There has not been any form of “anti-abortion” violence recorded in Canada in nearly 20 years, and pro-life organizations across Canada condemn violence against abortion providers.

Every year dozens of pro-life groups hold rallies and marches, including the March for Life rally on Parliament Hill held annually. None of these events are associated with any recognized far right organization.

Contrary to the CAF report linking pro-lifers to violent far right groups, in Canada it has been observed that pro-lifers are the victims of violence and harassment, rather than abortion-providers.