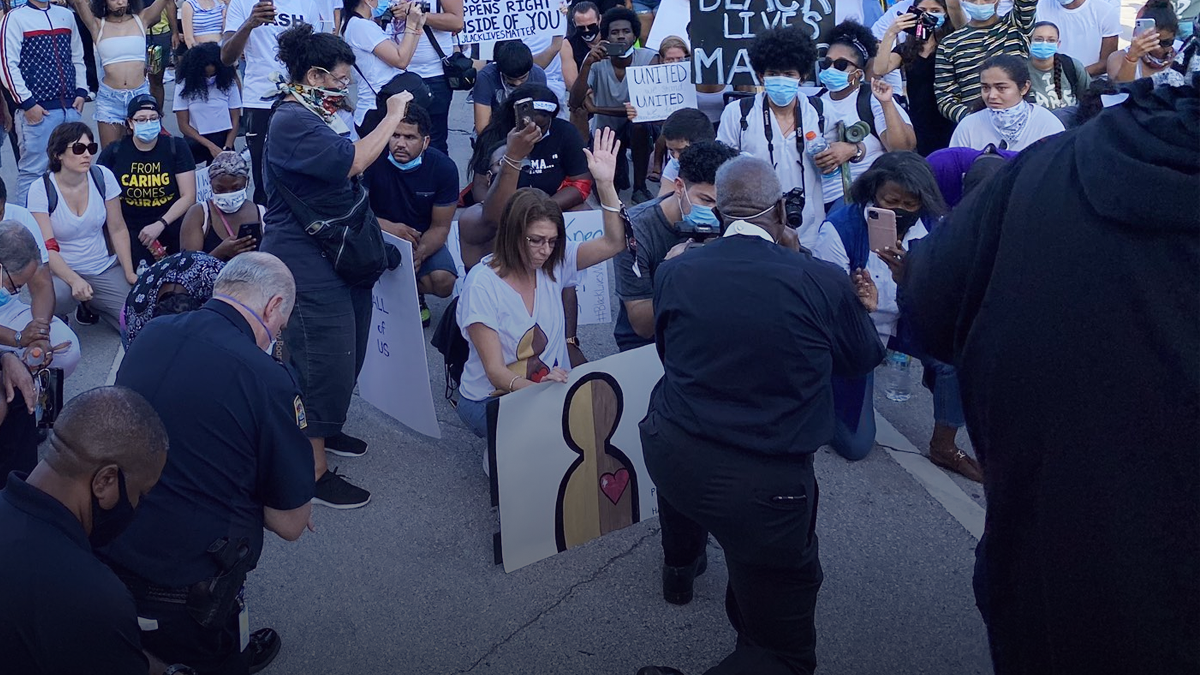 Protests over the death of George Floyd have rocked the US and beyond in the past week. The dialogue around the incident has placed police brutality, racism and discrimination at the forefront of people’s minds.

Throughout this, the mainstream media has contributed to an atmosphere of fear and division by highlighting the worst elements of the protests.

Despite the horrific attacks on innocent civilians and the numerous instances of looting and vandalism, there have been several episodes that show the good in people.

Here are eight of the most hopeful moments coming out of the protests:

In a heartwarming gesture, a Flint, Michigan sheriff put down his riot gear and joined protesters in solidarity.

During the incident, Genesee County Sheriff Chris Swanson high-fived and embraced people in the crowd after they chanted “walk with us!”

“I want to make this a parade, not a protest,” said Swanson.

Protesters hand over violent agitator to the cops

Among those in the peaceful demonstrations, a number of violent extremists have sought to use the protests as an opportunity to cause chaos.

During a protests in Washington, DC, one masked Antifa member was apprehended by peaceful demonstrators and handed over to the police.

In the video of the incident, the saboteur is rushed by a group of people after attempting to smash up a sidewalk to create projectiles to throw at police.

The group then carries the protester to the police where he is subsequently arrested.

A video from Pittsburgh, Penn. shows a peaceful protester approaching a group of riot police carrying a case of water bottles to quench their thirst.

He freely gives the group the water as some of the officers smile on.

“I know you guys are thirsty,” says the unidentified protester.

“I know you guys are out here doing your job. I’m not mad at you.”

In a tear-jerking video an African-American woman emotionally confronts a pair of Antifa protesters vandalizing a Starbucks.

“This is not a black woman who is putting black lives matter,” says the unidentified woman.

“Listen don’t spray stuff out here when they’re going to black people for this and black people didn’t do it.”

“You are all part of the problem!”

During a protest in Minneapolis, a peaceful demonstrator condemned looters and opportunists using the protest for their own advantage.

This is what I’ve got to say to people who are destroying things. If you really feel that you’re going to be opportunistic, something is wrong with you,” the man says on live television.

Group of protesters from a barricade to prevent looting

One video coming out of the protests shows a group of peaceful demonstrators surround a CVS pharmacy building to prevent looting.

In the video, several of the protesters link arms to prevent others from vandalizing the property and breaking in.

Men surround outnumbered police officer to protect him from mob

After a police officer was separated from his contingent during a protest, several peaceful demonstrators surrounded him to prevent a mob beating.

Photographs of the incident show several people guarding the lone officer as a crowd watches on.

When police officers and demonstrators met in Miami-Dade County, the men and women in uniform knelt and joined the protesters in prayer.