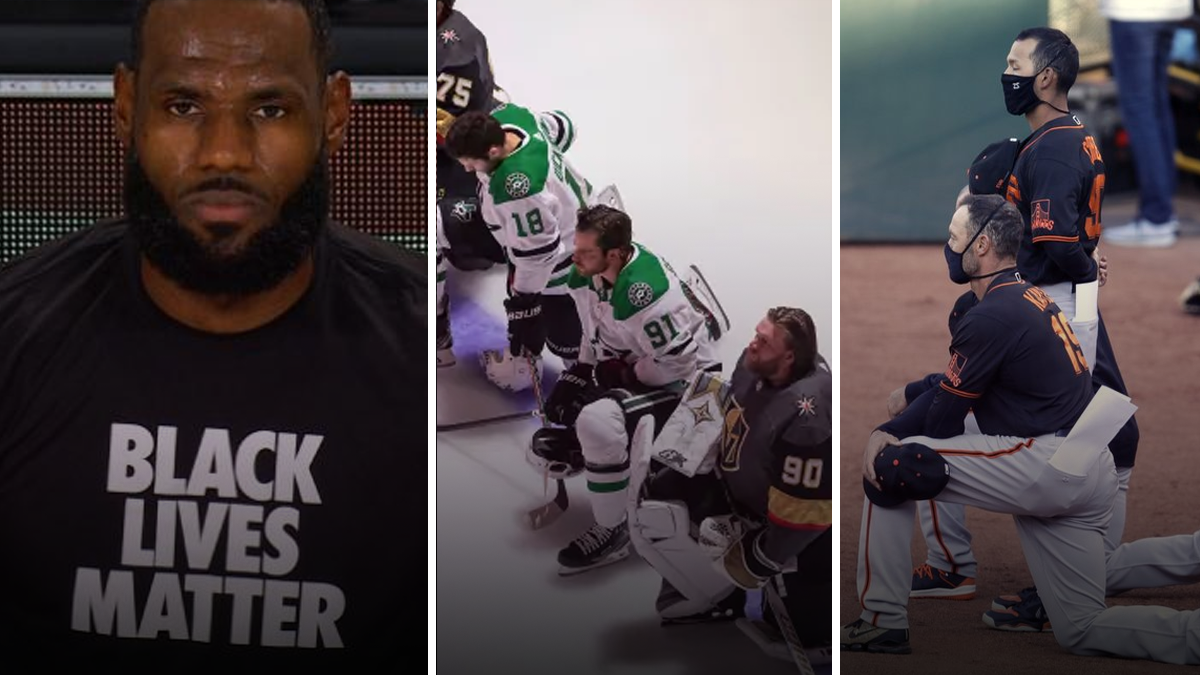 With the NBA, MLB and NHL all running televised games concurrently, it’s a great time to be a sports fan — unless you prefer your sports teams playing without virtue signalling and “woke” social justice advocacy.

Based on the ratings, which have seen some pretty dramatic drops in the NBA especially, it’s clear that most people actually prefer professional athletes to focus on their game, rather than their politics.

Someone should tell this to NBA players, including the Toronto Raptors and their opponents like the Los Angeles Lakers, who chose to kneel in protest during “O Canada” — mimicking the trend started by (now former) NFL player Colin Kaepernick who controversially began kneeling during the American anthem in support of Black Lives Matter.

Regardless of whether you feel that kneeling during our national anthem is a legitimate form of protest, or just insulting to our veterans, it is very ironic to see American athletes kneeling during the Canadian anthem as if they are in a position to judge. Canada, after all, has a deep history of combating anti-Black racism and helping Black American flee slavery.

It is even more ironic when you consider these are also the same players who ignore slavery and organized genocide occuring in China.

Similarly, someone should tell NHL executives and players that there is nothing wrong with supporting police officers. A recent report indicated that the Boston Bruins went ahead to photoshop the Boston Police Department logo off player Charlie Coyle’s shirt before posting it to social media to avoid “unfair criticism.”

There should be nothing embarrassing about supporting police officers, and it should not be a sports teams job to hide a players support for them at a time when radical slogans like “defund the police” are trending across North America.

In fact, a recent poll shows that 81% of Black Americans want police funding to retain or increase — not be defunded.

Not all athletes and executives, however, are buying into the hype of jumping on social justice causes.

“I’m a Christian, like I said, and I just can’t get on board with a couple of things that I have read about Black Lives Matter. How they lean towards Marxism and they’ve said some negative things about the nuclear family.” said Coonrood in an interview with NBC.

Co-owner of the WNBA’s Atlanta Dream, Senator Kelly Loeffler (R-Georgia), also did not mince words when she doubled down on her stance against the Black Lives Matter movement — suggesting it is trying to “destroy” America. Loeffler specifically called them anti-Semitic, and standed firm against their Marxist roots and their opposition to the nuclear family.

It’ll be interesting to see which direction these leagues go moving forward, including whether they continue to move towards supporting social justice, or focus on what they do best: play ball.