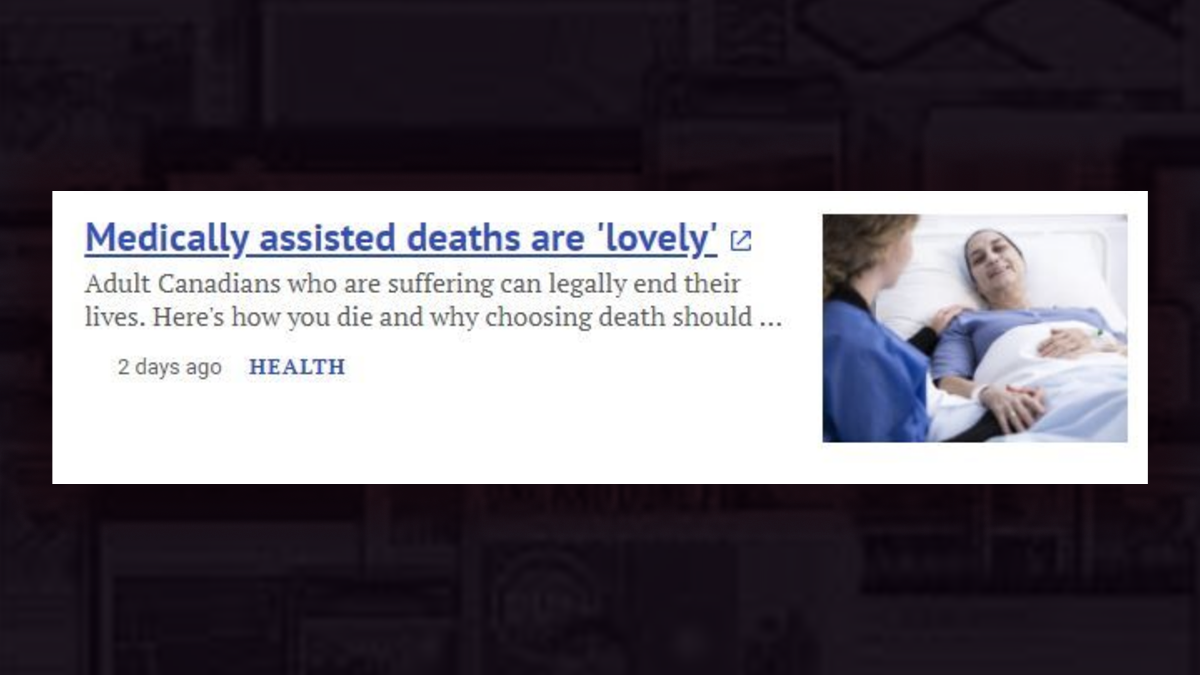 “Canada is a progressive country when it comes to dying,” the article reads.

“Consenting adult Canadians with incurable, intolerable suffering are now legally able to end their lives, along with the assistance of a doctor or nurse practitioner.”

No voices critical of MAiD were included in the article.

The article quotes Dr. Lonny Shavelson, a California doctor who specializes in MAiD, going into graphic detail about the procedure while describing the experience as “lovely.”

The article also features a pro-assisted suicide activist who is concerned that rules around MAiD are not being liberalized fast enough in Canada.

The Postmedia article ends disturbingly with an activist saying she wants MAiD rights extended to “mature-minors,” ending the requirements that a patient must be an adult.

“We don’t think this group should be excluded,” Dying with Dignity CEO Helen Long told Healthing.

“There are many individuals suffering from an intolerable condition.”

The article laments that Bill C-7, the Trudeau government’s attempt to change MAiD laws, has been postponed due to coronavirus and Trudeau’s prorogation of parliament.

Bill C-7 comes after a 2019 Superior Court of Quebec ruling which stated that MAiD laws in Canada needed to change.

“Bill C-7 removes the requirement in the law that a person’s natural death be reasonably foreseeable in order to qualify for assisted death. Therefore, people who are not terminally ill can die by euthanasia. The Quebec court decision only required this amendment to the law, but Bill C-7 goes further,” Schadenberg told True North.

“Bill C-7 creates a two track law. A person whose natural death is deemed to be reasonably foreseeable would have no waiting period while a person who is not determined to be dying would have a 90 day waiting period before being killed by lethal injection.”