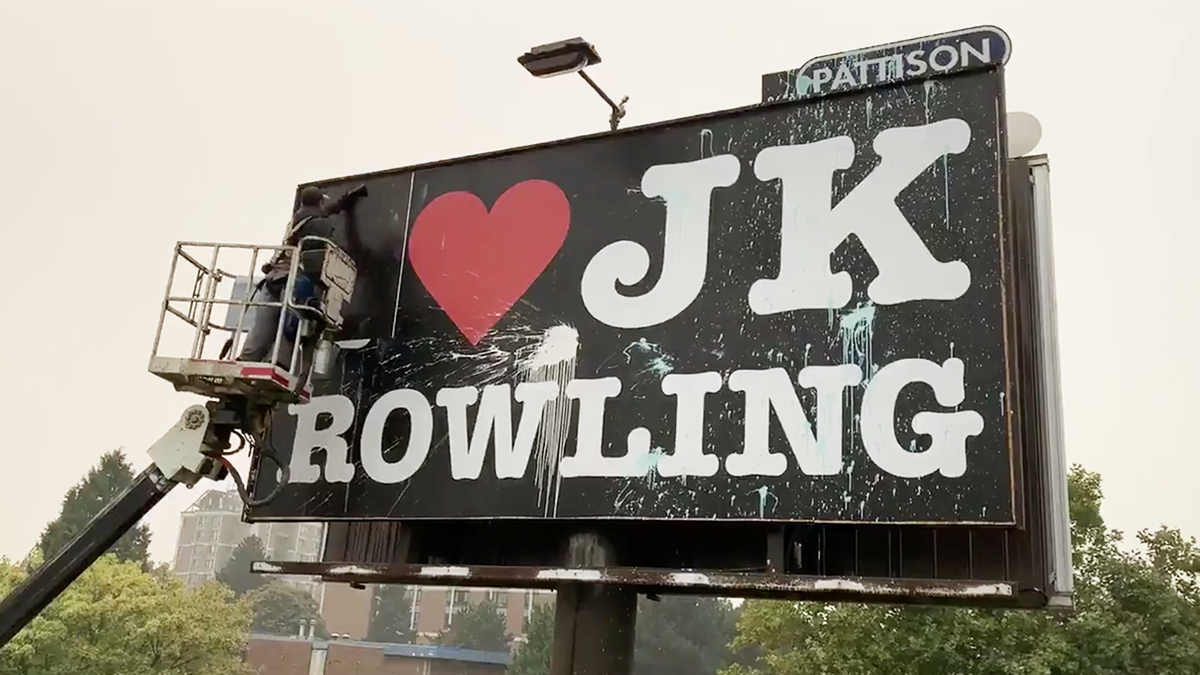 At 6:30am on Friday morning, a billboard reading “I ‘heart’ JK Rowling” was unveiled on Hastings Street in Vancouver.

Later that night, the billboard was vandalized and covered with splattered paint, and by Saturday afternoon, it was gone.

The sign is a replica of the “I ‘heart’ JK Rowling” poster put up in a rail station in Edinburgh, Scotland this summer by women’s rights advocate Kellie-Jay Keen-Minshull. The message references legendary Harry Potter author J.K. Rowling’s support of women’s sex-based rights.

“So I want trans women to be safe. At the same time, I do not want to make natal girls and women less safe,” Rowling wrote in a June 2020 blog post. “When you throw open the doors of bathrooms and changing rooms to any man who believes or feels he’s a woman – and, as I’ve said, gender confirmation certificates may now be granted without any need for surgery or hormones – then you open the door to any and all men who wish to come inside. That is the simple truth.”

According to Metro Vancouver resident Amy Hamm, she and her friend Chris Elston bought the billboard space on Hastings Street to “show solidarity with J.K. Rowling for being such a brave role model for women and girls,” and “to engage Canadians in a conversation about gender identity ideology and the impact it has on women’s sex based rights.”

Although they paid to have the billboard up for “one to three months,” a work crew was onsite to remove the signage as of 3:00pm on Saturday. Pattison Outdoor Advertising told Hamm and Elston they had received one formal complaint about the billboard.

Pattison Outdoor Advertising also faced a billboard controversy last summer, when there was outcry over signage in Calgary featuring People’s Party of Canada leader Maxime Bernier with the message, “Say No to Mass Immigration.” After initially stating the ads did not violate any advertising guidelines, Pattison Outdoor Advertising President Randy Otto eventually released a statement saying the posters would be removed.

As for the J.K. Rowling billboard, Pattison Outdoor has not released any statement and did not immediately reply to True North’s request for comment.