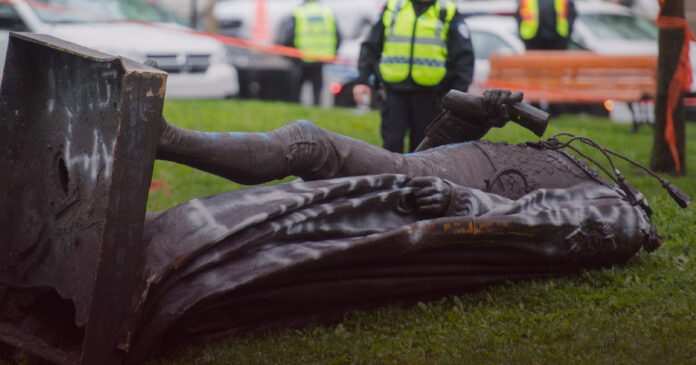 A new poll by Ipsos surveying attitudes towards the defacing of historical statues found that an overwhelming majority of Canadians were against the actions of protesters who topple monuments.

The poll, which surveyed 1,000 people across the country between September 11 and 14, 2020 was conducted on behalf of Global News.

According to the data, 74% of Canadians disagreed with actions taken by protesters in recent months, while only 26% of people agreed with the vandalism.

When asked whether Canada should take official steps to remove the statues legally, 39% of Canadians agreed that they should be removed if they are deemed to be racist, while 61% were against the idea.

Another poll conducted by Leger and the Association for Canadian Studies also found that there were more Canadians who want to keep statues than those who wish to see them toppled.

Anti-racism activists throughout Canada have called for or have illegally removed statues of famous Canadians like Canada’s first prime minister Sir John A Macdonald.

In August, radical protesters toppled and decapitated a statue of Macdonald in Montreal.

“Canada wouldn’t exist without Sir John A. Macdonald. Canada is a great county [sic], and one we should be proud of. We will not build a better future by defacing our past. It’s time politicians grow a backbone and stand up for our country,” tweeted O’Toole about the incident.

In Ontario, the township of Baden, a statue of Canada’s first prime minister was quietly removed from its pedestal and placed in an undisclosed storage location after local councillors voted to have it taken down.

“This is a step forward towards reconciliation and the Township of Wilmot is looking forward to conversations with the Indigenous Community.”