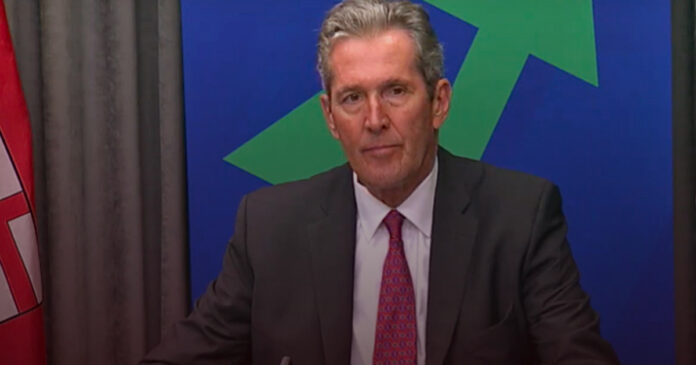 At a press conference on Monday, Manitoba Premier Brian Pallister suggested enforcing a curfew in the Winnipeg Metro Region might be necessary to curb the spread of the coronavirus.

“We’re giving serious consideration to implementing a curfew, a curfew that would be designed to restrict travel between key hours, when gathering sizes tend to be dangerously in excess of the rules, late-night hours obviously,” he said.

Pallister noted that he heard reports of many large Halloween parties over the weekend despite limits on social gatherings. On Saturday, Manitoba reported 349 new cases and four deaths, the highest since the pandemic began.

Pallister, citing Chief Public Health Officer Dr. Theresa Tam, said that Manitobans need to reduce the number of people they come into contact with by 75% to limit the spread of coronavirus.

“She said last week that the most significant thing Canadians can do to arrest the COVID curve and ultimately to flatten it is to reduce their personal contacts by half,” he said.

“Here in Manitoba, I believe we need to drop those personal contacts by more than that.”

For over two weeks Winnipeg has been Code Red, the most extreme of Manitoba’s four-code Pandemic Response System. Under Code Red, schools and non-essential businesses may be closed and non-urgent surgeries and diagnostic procedures may be cancelled.

As a result of the lockdowns, economic turmoil and isolation lead to increases in mental health issues and drug overdoses.

Under full lockdowns in Ontario, the number of crucial surgeries performed was decimated, including life-saving diagnostics and treatments for child cancer patients.