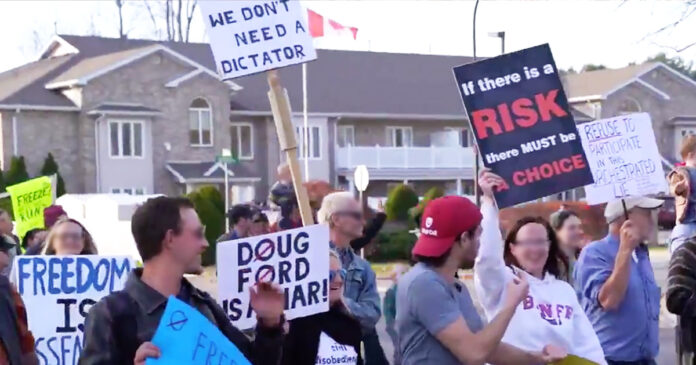 Despite the town of Aylmer’s “state of emergency,” thousands of people gathered to participate in an anti-lockdown rally to protest Ontario’s lockdown measures on Saturday.

Meeting outside the East Elgin Community Complex, the Freedom March included a march down Talbot Street, a motorcade and speeches from local community members.

Protesters cited an encroachment on their rights and freedoms, and many protesters held signs that read “Facts over fear” and “No new normal.” The event ended at 4 p.m.

In the weeks leading up to the protest, the Mayor of Aylmer Mary French declared a state of emergency out of concern for the possibility of “unrest and disruption of local services.” By declaring the state of emergency, French was able to free police resources to focus on the protest.

Aylmer Police Chief Zvonko Horvat said protesters participating in the Freedom March were expected to adhere to the state of emergency declaration and to protest peacefully. The organizers of the Freedom March expressed full intention to exert their right to assemble regardless of pressure from the local police force and the town’s declaration.

While there was a significant police presence and a simultaneous counter protest, the demonstration was relatively peaceful. Despite concerns of unrest and fear of the disruption of services, Aylmer police reported no injuries or damage to property.

The town of Aylmer also issued a request to the provincial government for permission to require proof of mask exemptions in advance of the protest. The Justice Centre for Constitutional Freedoms called the request “ridiculous.”

The first Freedom March in Aylmer took place on October 27 and drew a crowd of 200 people.