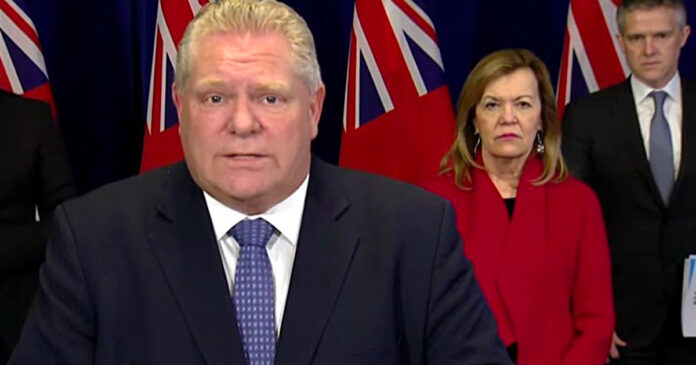 The Ontario government announced new lockdown measures for the province on Friday, moving Toronto and Peel into lockdown.

Under the latest lockdown regime, indoor social gatherings are prohibited except for members of the same household. Outdoor public social gatherings have now also been limited to a maximum of 10 people at one time. Meanwhile, weddings, funerals and religious services are also being restricted to 10 people for both indoor and outdoor services.

As for restaurants, they are being forced to close indoor and outdoor dining and to only serve takeout, drive-through or delivery. Ontario has also announced that personal care services such as spas and salons are to remain closed.

Malls are also being ordered to stay closed, however, retailers are allowed to do curb-side pickups.

The new rules will go into effect beginning on Monday, November 23.

“It’s clear more needs to be done to limit community transmission of COVID-19 so that we can keep our schools open, safeguard our healthcare system capacity, and protect our most vulnerable,” said Ontario’s Minister of Health, Christine Elliott.

“Lockdowns are a difficult but necessary step to prevent COVID-19 outbreaks and bend the curve in the number of new cases.”

The announcement also included a shuffle of control zones with Durham Region and the Region of Waterloo entering into the red-control level, while Huron Peth, Simcoe Muskoka, Southwestern Public Health and Windsor-Essex County were upgraded to the orange-restrict zone.

Ontario Premier Doug Ford has warned that should cases continue to surge, he is prepared to initiate further lockdowns over the holiday season.

“Well, nothing is more important other than the health and safety of the people,” said Ford earlier this month.

Meanwhile, in October a World Health Organization official urged world governments not to plunge their citizens into a second lockdown this year.

“We in the World Health Organisation do not advocate lockdowns as the primary means of control of this virus,” said Dr. Nabarro in an interview with The Spectator.

“The only time we believe a lockdown is justified is to buy you time to reorganise, regroup, rebalance your resources, protect your health workers who are exhausted, but by and large, we’d rather not do it.”