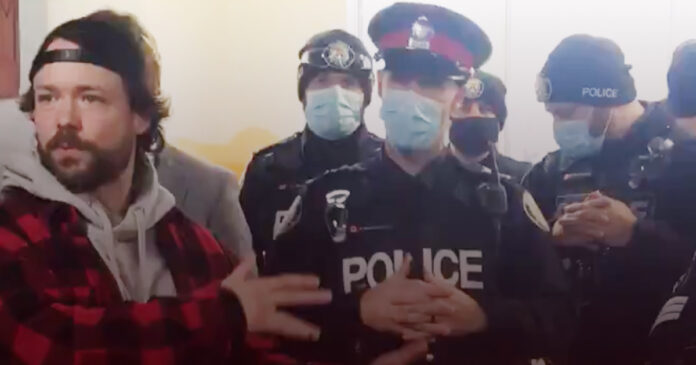 Adamson Barbecue at 7 Queen Elizabeth Blvd. in Etobicoke opened its doors again on Wednesday morning despite warnings from authorities that they would be shut down and fined if they did so.

Despite a heavy police presence at the restaurant, no one was fined and Adamson sold out of food by around noon.

In response to Skelly’s decision to open his restaurant, police laid nine charges against the small business owner.

The violations Skelly is being accused of include violating indoor dining regulations, holding an illegal gathering and operating his business without a license.

“Everything went well. They asked some people to leave. They did not. Once again, the police did not issue any fines to me or any of the patrons of my restaurant,” owner Adam Skelly told the media.

On Tuesday, Skelly had opened his business despite the new wave of lockdown restrictions on businesses recently announced by the Ford government.

“For anybody who’s a fan of freedom and sovereignty, the right to choose what you wear, where to go, who to have over at your house, what businesses you can go to, I would love to meet you,” Skelly said in a video posted to Instagram.

A large crowd of patrons and supporters gathered outside of the restaurant on Wednesday morning, leading police to arrive. When police tried to make a statement to the crowd, Skelly assisted them in gathering everyone.

“I just wanted to bring your attention to the fact that the restaurant is operating against the public health order that was issued yesterday,” one officer announced.

“You are violating the [Reopening Ontario Act], and hopefully when I ask you to leave… otherwise there is a possibility of being charged.”

Rather than dispersing after the warning, the crowd continued to meet, with an informal party breaking out in the Adamson parking lot.