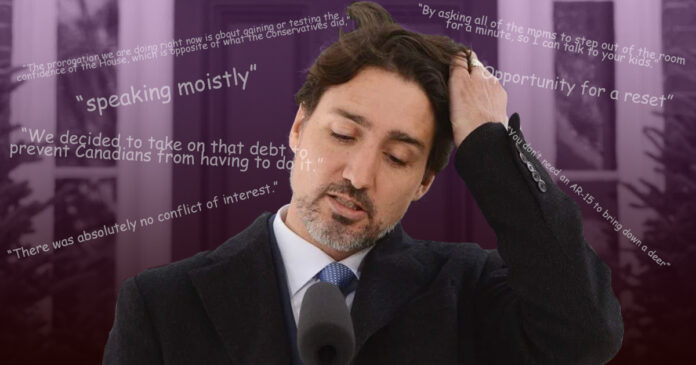 Canadians have become accustomed to Prime Minister Justin Trudeau’s penchant for verbal gaffes and ridiculous remarks – and 2020 was no different.

2020 was another year full of missteps, gaffes and embarrassing moments that made all Canadians cringe.

Here is my list of the top Stupid Things Trudeau Said in 2020:

Masks prevent you from “speaking moistly” on others

Even Trudeau found this comment of his cringe-inducing. While delivering one of his routine coronavirus daily press conferences, Trudeau tried to be poetic about the benefits of wearing a mask.

According to the prime minister, wearing a mask helps prevent people from “speaking moistly” on each other.

To his credit, Trudeau seemed to immediately regret the unfortunate word choice, calling it a “terrible image.”

One of Trudeau’s routine COVID-19 briefings outside Rideau Cottage took a creepy turn in May. He wanted some alone time with the nation’s children to speak to them about Mother’s Day.

“By asking all of the moms to step out of the room for a minute, so I can talk to your kids. I’ll give you a second, okay,” said Trudeau.

Government “took on debt, so Canadians wouldn’t have to”

The prime minister has a loose relationship with how budgets work, evidenced by his belief that a budget can balance itself.

His most recent instance of economic wishful thinking took place in July, when he told Canadians that the government took on nearly one trillion in federal debt so that Canadians wouldn’t have to bear the burden.

“We made a very specific and deliberate choice throughout this pandemic to help Canadians,” said Trudeau.

“We decided to take on that debt to prevent Canadians from having to do it. If the federal government hadn’t taken on significant debt in order to send money to Canadians, to support businesses and households.”

Trudeau seems to have forgotten who has to pay for all this debt – the taxpayers.

Prime Minister Justin Trudeau has a long history of failing to take responsibility for his mistakes.

This year he downplayed his responsibility in the WE Charity affair by saying it was merely a “communications and optics challenge.”

“There was absolutely no conflict of interest. Yes, there are connections, but there was no conflict here. There was no profiting from this situation,” said Trudeau in an interview with the CBC’s Rosemary Barton.

Trudeau made the comments despite the fact that he is still under investigation by the ethics commissioner and no ruling has been issued on whether he broke any conflict of interest laws.

Trudeau says the coronavirus is an “opportunity for a reset”

Despite the Liberals accusing the Conservatives of being conspiracy theorists for condemning the World Economic Forum’s “great reset,” Trudeau himself called for a “reset.”

In September, the prime minister himself fuelled speculation and controversy when he told a UN conference that the pandemic is an “opportunity for a reset” for world powers to implement their vision of a new post-coronavirus society.

Trudeau says his prorogation was the “opposite” of Harper’s

Despite being prime minister for more than five years, Trudeau continues to compare himself to his Conservative predecessor Stephen Harper.

Earlier this year, when he prorogued parliament, effectively shutting down any investigation into the WE Charity affair, Trudeau said that the Liberal government’s decision to shut down parliament was “opposite” of Harper’s prorogation in 2008.

“The prorogation we are doing right now is about gaining or testing the confidence of the House, which is opposite of what the Conservatives did,” said Trudeau at the time.

Over the summer, as far-left activists were burning cities to the ground and clashing with police officers in the streets, Trudeau was asked what he thought about President Donald Trump’s decision to call for the military to help curb violence.

Instead of providing a fully-fleshed out answer, the prime minister paused for an uncomfortable 21-seconds, licking his lips before answering the simple question.

After announcing a sweeping ban on 1,500 different types of guns, Trudeau justified the decision by claiming that hunters don’t need an AR-15 rifle to bring down game.

“For many families, including many indigenous people, firearms are part of traditions passed down through generations,” said Trudeau.

However, AR-15s were already prohibited for hunting purposes before the most recent gun ban. (And the similar Ruger rifle was a non-restricted firearm prior to the ban.)

What other stupid things have Justin Trudeau said? Check out Candice Malcolm’s book!